Every week I post a roll of “found” film that has been forgotten in someone’s attic or inside a camera, often for half a century.  You never know what you’re going to end up with though.  With the old spools, it’s pretty clear that the pictures will be pretty old, and often yield a few surprises from yesteryear.  Half the time, I don’t get any pictures at all – and this gets worse the older the film.

With 35mm film, the success rate is much higher, and often the photos are 30-40 years old.  But you never really know for sure.

This week’s roll came from an admittedly pretty shiny roll of Kodak 35mm film.  But I was still hopeful something cool would come out of it.  I held up the negatives to the light, and saw a bunch of pictures kind of like this: 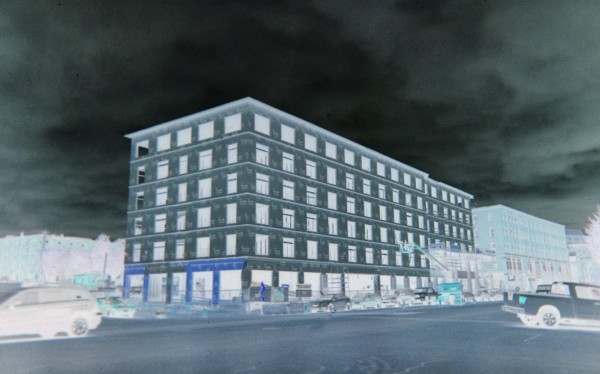 I thought, “boring” and wasn’t going to even bother scanning them, until I realized it was a whole bunch of shots of the same building from the same spot – a sort of “time lapse” of some building under construction. So I decided to scan them after all, and thought it would be fun to do something different, and string them all together in a time-lapse sort of video. So here is what I ended up with:

Hmmm…wouldn’t it be interesting to try and figure out what building this is?  Gee, I wonder….  As it turns out, on the very last frame, a clue appears.  Note the blue sign above the back end of the white pickup truck on the right.  Yup, it’s a Courtyard Marriott? 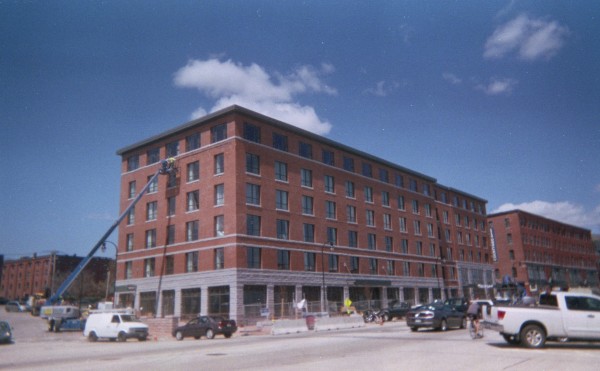 Where, you ask?  Well, thanks to the clue offered by the “Maine Seafood” truck that appears partway through, it turns out that this is the Waterfront Courtyard Marriott in Portland, Maine.  And now I can figure out when it was built, so I can determine just how long this “found film” has been lost.

So it turns out….six months.  They completed this thing like in May 2014.  Which is why this was really just “misplaced film.”

But I still wonder, why did someone in 2014 go through the trouble of taking pictures of this thing from the same spot over and over, using a film camera, and then simply discard the roll.  Was it to document construction for insurance purposes?  In case the thing burned down or something?  I’d like to know.

And that’s this week’s “found film” roll.  Blast from the past!