I have an old Holmes stereoscope that dates from around 1900 or so.  What’s a stereoscope?  It’s a device that allowed you to look at two side-by-side photographs in such a way that the image appeared to be in 3 dimensions. 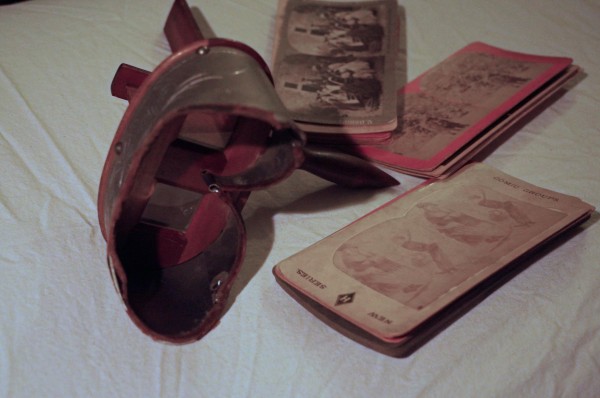 This is not new technology.  The earliest stereoscopes date from the 1830s.  They were used with line drawings, as photography wasn’t really in practical use yet. The design for my stereoscope originated with Oliver Wendell Holmes in 1861, and would last 100 years.  I got mine with a stack of stereograms – these are the pictures viewed in the scope.  Many are faded unevenly and most have names written on the backs in pencil.  All can be viewed in 3-D. 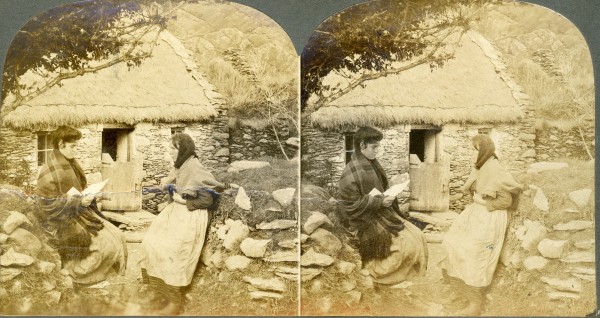 I also have a “stereo” camera, made by the company Realist around 1952.  The Realist cameras were used to take simultaneous “stereo” slides, which could then be seen in 3D through a special viewer.  It’s the same principle used by the View-Master.  I’m sure you had one as a kid.  The View-Master could be a whole separate blog post.  did you know they are still in production?

Anyway, I don’t have a Realist viewer.  And slides are hard to develop these days.  So I thought I’d test out the camera and print the photos on cards so they could be viewed in the 100-year-old stereoscope.  Only it turns out that the camera doesn’t space the exposures correctly, and virtually all of them overlapped.  And had a lot of dust and specks on them.  So I will need to work on that separately.

I thought about other ways I might be able to view photos from the Realist camera – it’s possible to use Photoshop, for example, to turn a pair of 3D photos into a photo that can be viewed through those red/blue 3D glasses.  And I stumbled across a website that talks about how you can quickly alternate two stereo photos, and that will also trick your brain into seeing an image in 3D.  It’s also easily accomplished in Photoshop.  For example, here is one of the photos from the Realist (cropped slightly):

[NOTE:  To see the 3D effect, I believe you will have to click on the photo so that it opens in a new window.  Give it a minute.]

So that’s when I asked myself, wouldn’t it be cool to scan some of those old stereographs, and turn them into animated gifs using the same technique?  Thus using modern technology to “hack” your brain into seeing them in 3D without the ‘scope?

So here are a few of those stereographs from 1900 or so, brought to life as gifs. 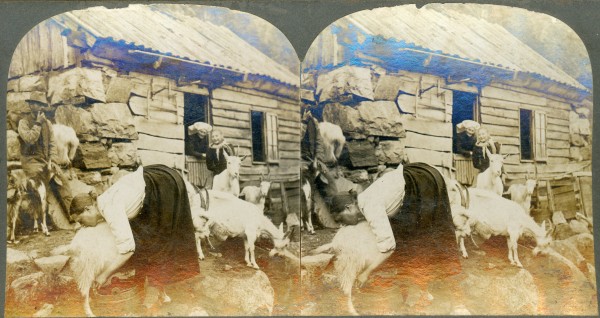 The first image is just an example; it shows the extent to which many of the pictures are faded. This one says “milking the Goats. Hardanger Fjord, Norway.”  (Reminder to click on the pictures, which opens a new window in each case.)

The photo below is captioned, “A letter from Pat in America, Ireland”

If you’re interested in trying this yourself (with digital photographs you take using your own camera), check out this tutorial.

One Response to Hack Your Brain: Mrs. McKinley in 3D