After three years living in Antananarivo, you gradually stop noticing the things that you found so fascinating and unique about this city as a newcomer.

Antananarivo is a city of 1.5 million people. It has a downtown – an older, French-looking “haute ville” (high city) – cobblestone roads running along, over, and under the hills that characterize this central highlands capital of Madagascar. 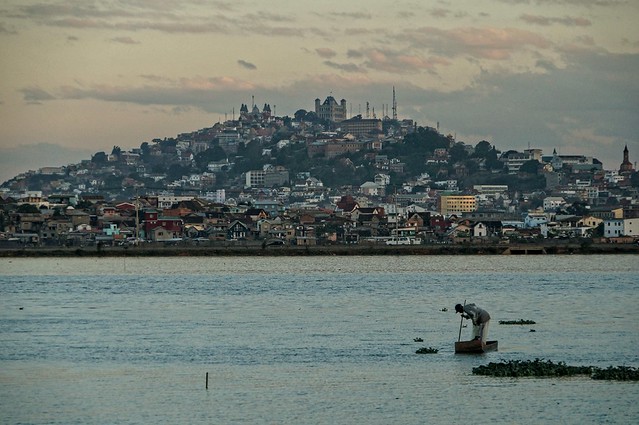 The low areas between the hills are filled with the accumulation of centuries – millenia – of silt that has run down with the seasonal rains. Raised digues – or earthen dikes – crisscross the low-lying areas, along with traffic arteries. They separate the rice fields, and also serve as earthen roadways. Others have been widened and paved over, and 1970s Renault and Citroen taxis, big Mercedes “bush taxis” and SUVs operated by government officials and expats move in stop-and-go traffic, while in the rice fields below, people living on a few dollars a day continue planting and harvesting rice as they have for generations. Running or biking through these areas, you feel like you’re in rural Madagascar – yet you’re in the middle of an African capital. And after awhile, it doesn’t seem all that unusual anymore. 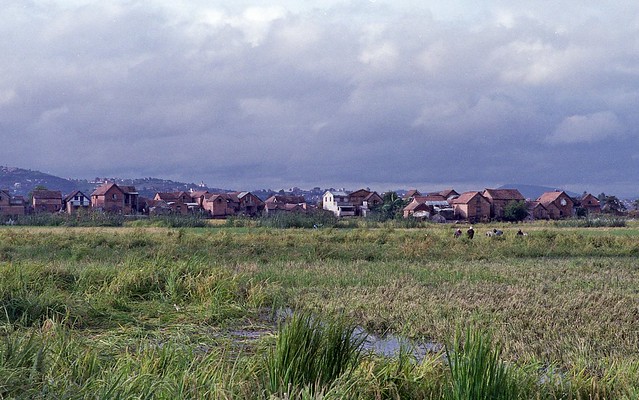 Many days when we head to work, the morning light is amazing. A yellow-orange light hangs over endless bright green rice fields that stretch into the distance, interspersed with areas of reflective water that reflect that light, the occasional egret fishing for minnows.

But every January, the race is on to harvest all of that rice.

Many of Madagascar’s people can trace their roots to Borneo. Much of their culture and traditions comes from that part of the world, to include architecture, rice cultivation, and the worship of the ancestors and their ways. Consequently, even though it may not make economic sense to an outsider, Malagasy people insist on growing rice when it might be more practical to grow other crops, and sell that to purchase rice. Planting and harvesting often appears inefficient, labor intensive, and wasteful, but it’s how the ancestors did it. And the city of Antananarivo accomodates the practice by operating locks and waterways in such a way as to flood and drain the rice fields in accordance with the needs of the growers. 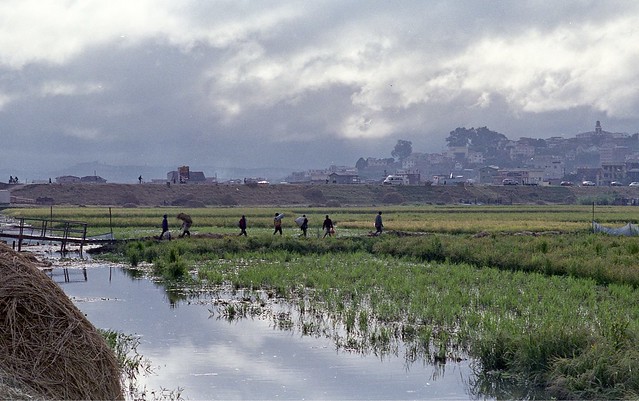 After nearly three years in country, we decided to spend a day taking a closer look at the rice harvest in Antananarivo. Throughout the rice fields, small groups of people can be seen heading out early in the morning carrying small scythes, tarps, bundles of rice straw, and a 50-gallon drum or similar item. Around 8 am the work begins. 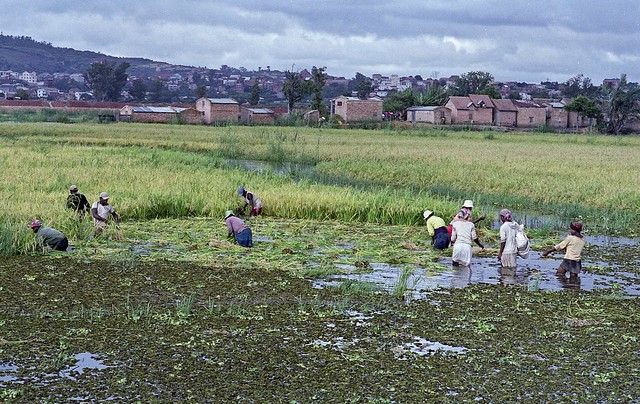 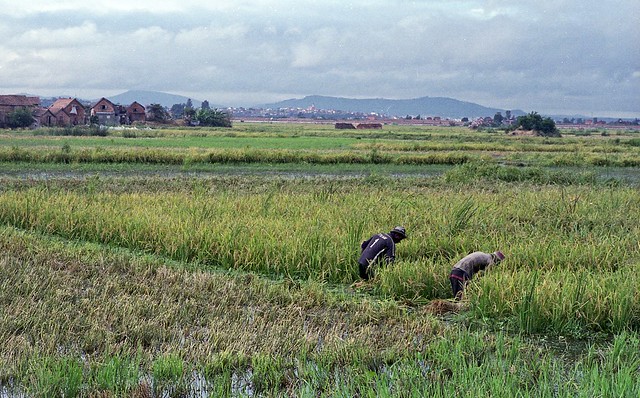 The workers deftly cut handfuls of rice using scythes, dropping the chest-deep rice grass where it is cut. Behind them, others wander into the knee-deep water carrying bundles of dried rice straw, and they drop them in the water, where they float. We watch, wondering what the dried bundles are for, and we finally realize they are pulling individual pieces of rice straw from each dried bundle, and using those to tie the freshly-harvested rice into bundles of wet rice straw.

Some of them stretch out a tarp on the water, which inexplicably floats as they toss the freshly tied bundles onto it. In other locations, pirogues are used to gather the rice and take it to the digue pathways, where they are piled up for the next step in the process. 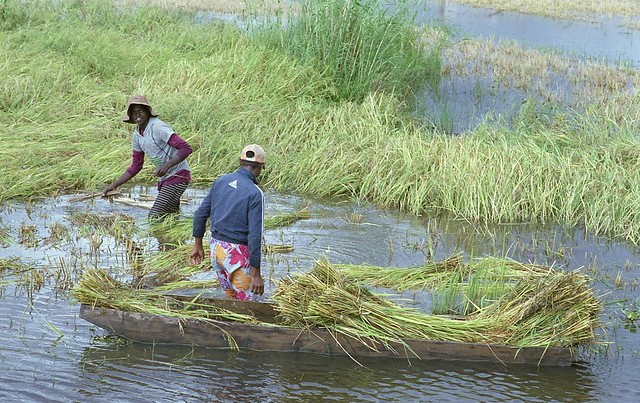 Up on the raised trails that crisscross the rice paddies, others are preparing for those next steps. Tarps are spread out across the full width of the path, and a 50-gallon-drum or something along those lines (we saw a wide variety of implements – main thing is it needs to be about the size of a drum, and not too heavy to carry from miles away) is rolled to the center of the path. 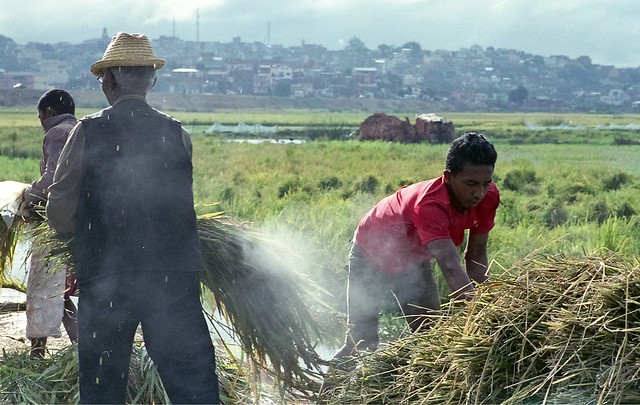 Bundles of rice, either just collected from the paddies or stacked the previous day, are then individually beaten on the drum (or other implement). The people doing the work are typically wearing some sort of apron and often also have a piece of plastic to protect their hands, because once this part of the process begins, rice starts flying everywhere, and it can sting. 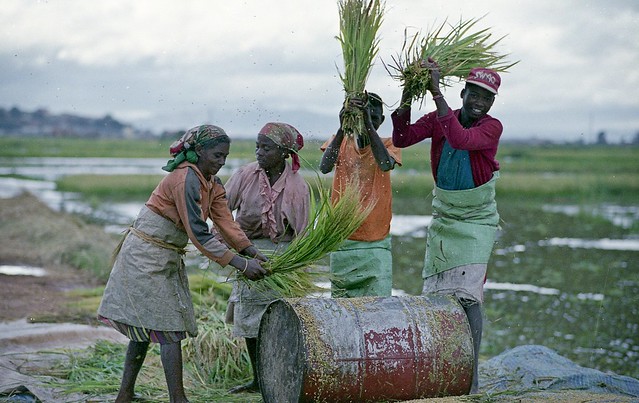 Bear in mind that these digues also serve as roads of sorts. They are used by people to get from village to village – not only on foot, but by bicycle, by zebu cart, occasionally a small Renault, and in our case, by motorcycle. The tarps cover the entire expanse of the raised pathway, and you feel a bit odd walking – or driving – over what is essentially these peoples’ food, but they will cheerfully pause what they are doing and wave you through. 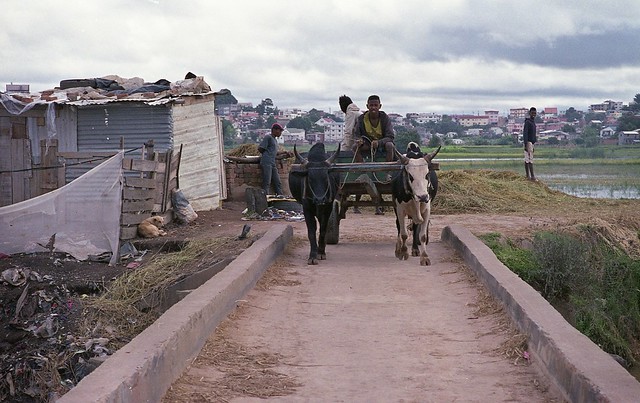 After the rice is “beaten” from the grass, the grains, still in their woody hulls, are collected in 50kg rice bags. Later, they will need to be spread out to dry – over the coming weeks, we’ll see rice hulls spread along roadways, sidewalks, in the middle of roundabouts…. Once it’s dry, flat trays will be used to toss the rice in the air so that the wind catches the lighter hulls and blows them away. These are in turn collected and used as fuel for the brick kilns that wil follow in the coming months. And the straw? The straw is immediately tossed aside, but will be spread on, and next to the roadways, and once dry, will be collected in piles to be used as feed for the zebus. Nothing is wasted.

Well, sort of. To be honest, a lot of rice is wasted.

As outsiders, one thing we ask ourselves is why the Malagasy insist on using such a labor-intensive and frankly wasteful method to harvest the rice. As you can see from the video, rice is literally flying everywhere – into the canal, off the tarp…in the villages there are chickens eating it almost as soon as it is harvested. Much rice remains on the plant and is discarded. So much rice is wasted that later in the year, on these pathways, the rice will start to poke out of the ground like a new lawn.

We wonder why there are not more entrepreneurs using hand-portable rice mills. Or industrial rice mills, which will capture a much higher percentage of the rice that has been painstakingly planted by hand months before, in exchange for a small “fee” – say, 5% of the harvest. Or why they even grow rice in the first place, when it’s relatively cheap, compared to other products. But we remind ourselves that we’re outsiders, and many of the mysteries of rice growing that were brought from distant Borneo as much as two millennia ago are simply not known to us “vazaha.” Maybe they’re not known to the Malagasy either – some will tell us, “the ancestors also didn’t know why they did it this way, but they did it anyway.”

But that’s how the rice gets harvested in Antananarivo.

This entry was posted in Madagascar and tagged Madagascar, pocket. Bookmark the permalink.