From the Township to the Championship: The Amazing Story Behind One Photo 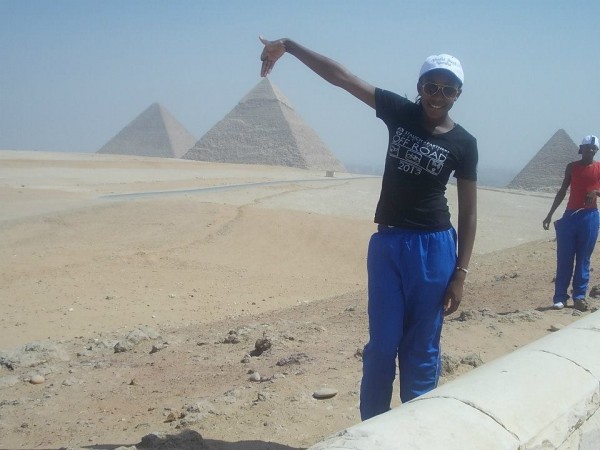 This is Sofia Simon, a fifteen-year-old, in Giza, Egypt.  She’s on a layover in Cairo, on her way to compete in the World Biathle Championships in Cyprus.  Never heard of biathle?  Eighteen months ago, neither had Sofia.  Eighteen months ago, she couldn’t swim, either.  And tomorrow she will represent her country in a sport that consists of running, swimming, and then running once again.

Sofia lives in Katutura, the low-income section of Namibia’s capital Windhoek.  Namibia  grapples with the world’s largest income disparity, divided largely along racial lines.   In Katutura, most people struggle to put food on the table as security guards, fruit stand sellers, taxi drivers, housekeepers or casual laborers.  After work many of them retreat to one of a staggering 5,000 “shebeens”, or makeshift bars that litter the community.  Young children, often supervised by an older sibling, wander the streets barefoot and in shabby clothes, avoiding the stray dogs that roam everywhere.

Meaning “the place we do not want to live,” Katutura was created in 1961 to conform with South Africa’s apartheid policy.  Thousands of Windhoek’s black residents were forcibly relocated to the north side of town where they could be kept as a ready work force, but far from the city’s much wealthier white community.   Today, Katutura is a colorful and energetic ramshackle of overcrowded cinderblock houses, ringed by improvised sheet metal and tin shacks stretching far into the bush.  Despite the end of apartheid in Namibia more than two decades ago, Namibians continue to segregate themselves in the communities built by the South African government years earlier.

Enter Marie-Jeanne Ndimbira and her after-school program, “Physically Active Youth”, or “PAY”.   Sofia was drawn to this program and the supportive, and nurturing environment it provides.  She joins dozens of other teens who daily attend programs at the center, study, or socialize with friends, and maybe get a peanut-butter and jelly sandwich.  At PAY, teens like Sofia are able to explore their own interests.  They have a quiet space to study – away from younger siblings who need supervision, away from uncles and cousins who have come to the city in search of work. As Ndimbira once told me, at PAY, kids are given the space to be good at something.  They discover self-esteem, and they allow themselves to succeed at schoolwork, and ultimately wind up making better decisions.  Virtually all of them pass their tenth-grade exams – in a community where the average pass rate is 35 percent.

In early 2012, South African expatriate Anton Swart arrived in Windhoek.  He had come to practice physical therapy, but he had also been tasked with bringing the sport of biathle to Namibia.  Biathle is a feeder sport for modern pentathlon, combining the relatively accessible swimming and running legs in a short, intense race in the hopes of gradually introducing modern pentathlon’s other disciplines – fencing, horse jumping and shooting.  I had come to a couple of biathle races, but was mystified by the lack of black participation in a country that is less than 7 percent white.  So I introduced Anton to Physically Active Youth.

The 40 or 50 teens who came to hear our talk listened attentively.  I explained that the newness of the sport to Namibia offered great opportunity.  Somewhat unconvinced myself, I told them that a lucky few might even participate in the world championships one day.  The kids were interested but skeptical.  One girl (Jenny) – who at the time could not swim a single stroke but would later become one of the group’s most graceful swimmers asked, “Will we be swimming against professionals?”

At the time I was unsure what she meant, but I realized that in Windhoek, swimming is a sport for the wealthy.  Swimmers spend significant portions of their lives in pools, starting from a very young age.  This requires club fees, access to an indoor pool, transportation, equipment, and money – all things in short supply in Katutura.   Katutura’s excellent municipal pool offered not a single organized swimming program.  What Jenny was asking was, “Do we stand a chance?”

Initially, no one – including the kids – thought we could succeed.  Sofia was among the first few kids who turned up, but she refused to leave the shallow end.  A handful of kids could swim 50 meters, if pushed.  We brought a half dozen of the best swimmers to a biathle competition – I bought them all running shoes and lent them my running shorts and swimsuits.  The running went great, but the first swim was a disaster, and I worried we had pushed too hard, too fast.  But instead of giving up, the kids asked if we could train them.

It was winter in Windhoek, so we needed to find an indoor pool they could use.  Jordan Frost, an intern from Toronto, and Ester Hilundwa, a PAY volunteer and graduate of the program herself, and  I approached a local swim team, the Namib Swimming Academy.  We persuaded them to let us use their pool for two hours on Saturdays.  We would pile kids into an SUV for the drive from Katutura to Olympia and back – a 40-minute round trip, and I would provide swim goggles while Jordan provided snacks.  Within a few weeks, we had two dozen regular swimmers and were joined by Julia Mushimba, who would take over the beginning swimmer program with a no-nonsense style (and continues to run the swim program to this day). 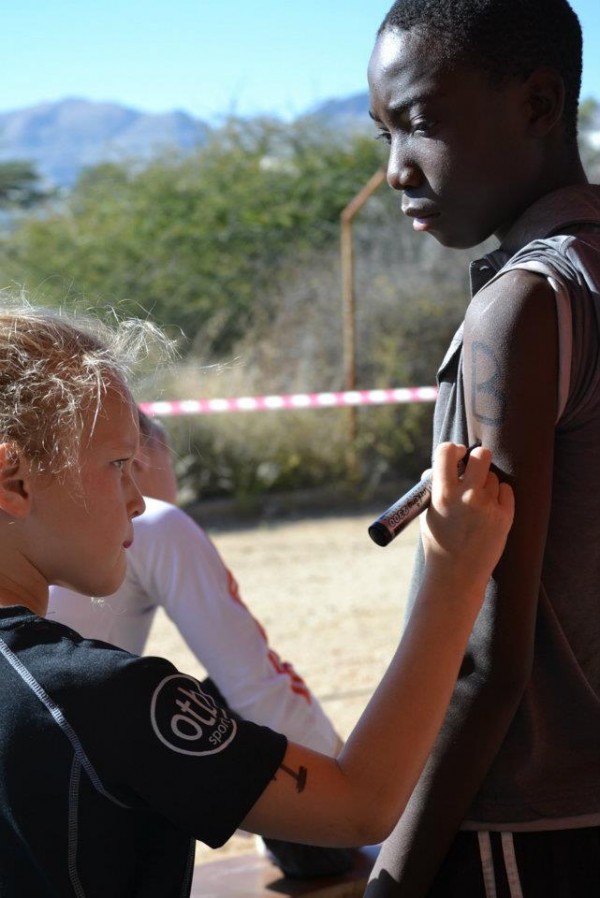 Once the weather warmed, we convinced the City of Windhoek to let us use the Katutura municipal pool after hours twice per week.  We set up a free swim program for the community but quickly had to cap participation at around 35.  A core group of kids came religiously and within six months, Sofia and the other beginners doing workouts of up to 1000 meters.  The growing sense of pride was almost palpable – we talked the top swimmers into entering local kids’ triathlons and biathle competitions.  And some of them started to win races.

In late 2012, Sofia was set to enter her first open water competition.  I worried that the kids would panic in the open water, I took them for a “test swim” the week before the competition – Sofia was joined by five male swimmers, and I would row in a rubber dinghy with two at a time, to ensure they could swim 700 meters comfortably.  The first surprise came when we entered the grounds of the Lake Oanob reservoir, which also offers game drives.  “Giraffes!!”  the kids shouted.  And I realized that these kids, who had lived in an African country their whole lives where a million tourists visited every year to see elephants and lions and zebras – these kids from Katutura had never seen a giraffe.

A week later, these kids who had never swum in a lake in their lives completed their first open water swim.  For weeks afterward, someone would always be wearing the t-shirt from this event. Then in early 2013 they entered one of Namibia’s major triathlons.  Sofia and fellow swimmers Martin Sheya and Peter Mawano would take home top prizes in the men’s and women’s open categories.  The swimmers from PAY were the only people of color to participate in the event. 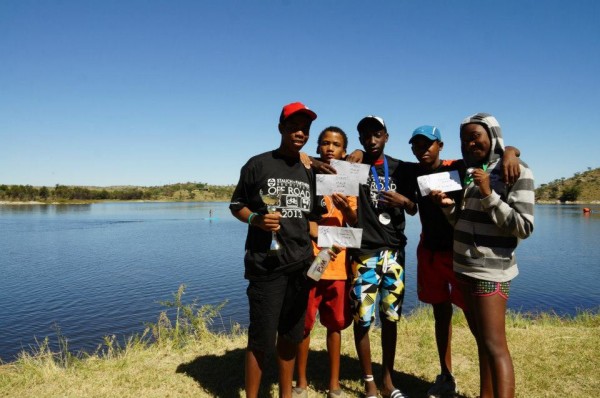 In July 2013, Sofia was preparing to enter her second Namibia National Biathle Championships.  In 2012, she had started the run too fast, and panicked when she hit the water out of breath, like most first-timers to biathle.  But by July 2013, Sofia was a completely different person – confident, strong, and sure of herself.  And this time, the outcome was different.  Sofia won her age group handily – and qualified to represent Namibia in the World Championships, along with two other Katutura swimmers, Ronaldo Uirab and Martin Sheya.

As a result, Sofia is now on the biggest trip of her young life – on her way to Cyprus, with a stop in Cairo.  In 18 months, she has made it from the township to the championships.

And so it happened that Sofia Simon, a fifteen-year-old from Katutura, with big hopes and dreams, and more stubborn than just about any other fifteen-year-old I’ve ever met, ended up in a picture with an Egyptian pyramid.  Sure, she got some help along the way – some pointers here and there, a few lucky breaks, some generous sponsors, the PAY program, whose staff would donate their stipend to help finance the trip.  But the most important elements of the equation were provided by Sofia herself – hard work, determination, and most of all, heart.

If you’re interested in seeing how Sofia, Ronaldo and the entire team from Namibia do at the World Biathle Championships, you can check out the Championships’ website here.

One Response to From the Township to the Championship: The Amazing Story Behind One Photo