Of course, depending on where you grew up, this may be the first time you’ve ever heard of them.  The “fairy circles” are an odd phenomenon in southern Africa – especially in Namibia – whereby vegetation refuses to grow inside a circle of anywhere from 3 to 10 meters in diameter.  The circles are dynamic – apparently they grow and “die”, to be filled in by grasses.  While they are active, seedlings will sometimes take root inside the circle, but they eventually wither and die.  (Here’s the photo again; click here for a video and scroll to 6:40) 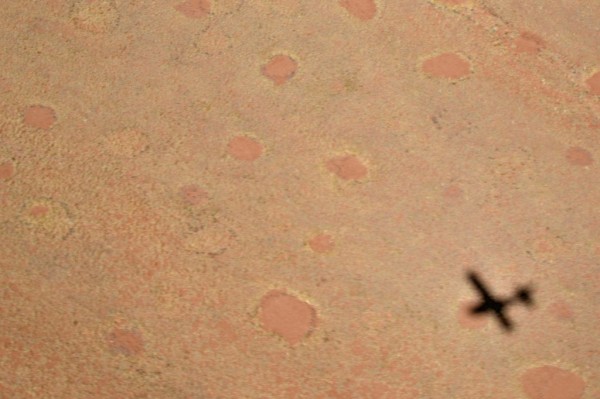 In my previous post, I talked about a solution to the mystery that had been proposed, whereby the circles were caused by hydrocarbon gas seepage from far underground, which displaces the oxygen in the sand within a certain radius and prevents plant growth.

But now a new solution has been proposed by German scientist Norbert Juergens.  The culprit?  Psammotermes allocerus!  Burrowing sand termites, that is…  Despite this theory having been previously debunked (“we dug a couple of them up.  No termites.”) it seems that Juergens has sifted through scores of fairy circles and consistently found these termites.  He theorizes that they kill all vegetation within a certain area because the sand conserves water, already scarce, when there are no plants to suck it up.  And that consequently the grass grows better along the perimeter of the rings (less competition from other plants), which then serves as a food source for the termites.

Though Juergens published his findings in Science magazine, I first read about his work on the website of The Gondwana Collection, a chain of Namibian desert lodges.  Other articles talk about skeptics, and Juergens admits his explanation isn’t airtight – no one has actually observed the termites killing the grass.  The BBC posted a stunning photo of fairy circles in which a lone tree has made a fairy circle of sorts on its own, posing a chicken-vs-egg question, as it relates to the absence of vegetation, allowing for increased water retention, which allows for an increase in vegetation?  Presumably the termites don’t like the taste of wood?