This week, I thought I’d post TWO rolls of found film. One roll has suffered quite a bit from age, and the other only had a couple of usable photos on it. I’m titling this post based on the photos having been taken opposite times of year. There is no other relationship between the two rolls of film.

The first roll comes from a Foldex 20, a folding camera made by Pho-tak in the 1950s that looks suspiciously like the Rollex 20, a camera made around the same time by the United States Camera company.  As of this writing, the camera itself (actual camera pictured below) can still be purchased on eBay from the person who sold me the film).  I’m throwing in the pictures for free.

The film (and camera) came from North Vernon, Indiana – a town of around 6,700 people, which would have had around 4,000 people when this camera was new.  Here’s a picture of the town’s main street:

If the camera’s original owners lived in or near North Vernon when they took these pictures, I don’t think they lived downtown.  Here are the photos I was able to retrieve from their film.  Know any of them? This is probably their view from the place. Not bad! And just for fun, this is probably the result of having accidentally pressed the shutter button while the camera was moving. Happens on those older cameras sometimes. And now that we’ve seen winter in Indiana, let’s have a look at roll number two. This one also comes to us from the midwest, but we have no clues other than we think it came from Alliance, Ohio – a town of 22,000 that experienced its heyday in the 1960s, when it was home to 28,000 people. The film being shared in this post is the one on the left, with the red backing paper. The one on the right was shared with you last week. 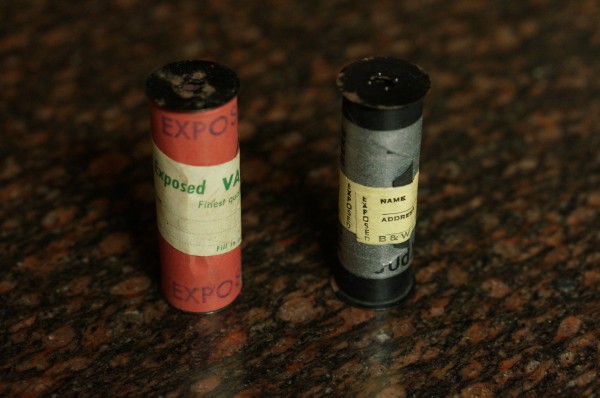 I suspect both rolls probably came from the same photographer and camera, as they both gave me similar  challenges, probably from the way they were stored over the years – the backing paper was stuck to the film, and there was some rust on the inside of the spool.  This week’s roll also had quite a bit of fungus on the film, which makes it difficult to tell much, other than most of the photos being from some sort of fishing trip to a lake.  They seem clearer at smaller size, which is how I’ll reproduce them here.  Enjoy!