Life Goes On in Kathmandu (part 1) 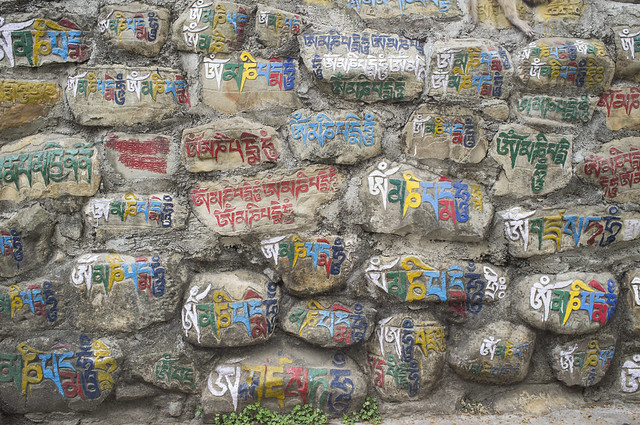 I wish my visit to Nepal had been under different circumstances.

I arrived late on April 27 – after hours on the tarmac in New Delhi, waiting for a parking berth to be on the forecast so the plane could take off. Thankfully the airline arranged for an extra meal to be delivered while we waited, and the extremely helpful airline staff were rushing up and down the aisle passing out extra meals from big cardboard boxes that had just been brought in, as the announcement clearing us for takeoff finally came. The airline billed the flight as a “rescue flight” – but the Kathmandu-bound flight was packed with Nepalis who had been waiting for anxiously since the quake to return home and check on their friends, loved ones, and property. There was a huge sigh of relief as the plane finally left the ground – and an even bigger one when it finally landed, after hours of circling over Kathmandu. 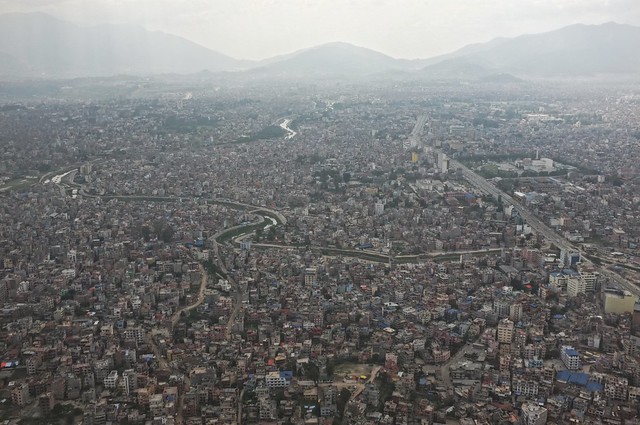 Though it is said to be difficult under normal circumstances, the airport was extremely chaotic.  The electricity was sporadic, and of course many of the workers were likely to be at home dealing with their own homes and families.  There were piles of luggage everywhere, people five deep surrounding the three luggage belts, no way to know where your luggage would show up. 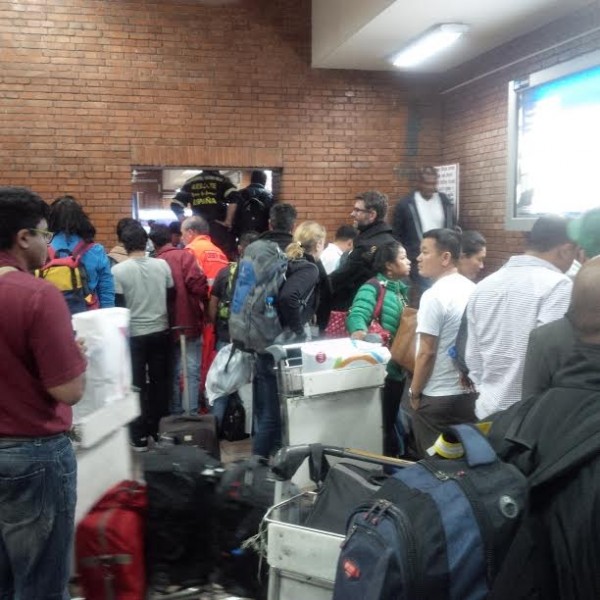 Eventually I spotted mine and I was on my way into the city in a rickety old cab.  The driver apologized for having his brother in the front passenger seat; apparently the cab was temporarily home for both of them.  Driving through the city at night, the effects of the earthquake were not immediately obvious from looking at the buildings (the hardest-hit areas were the rural mountain areas), but every open space, park, or square – even the space surrounding statues placed in roundabouts – was filled with blue tarps and plastic sheeting as people sheltered outside.

We stayed in a hotel where the lone receptionist looked as if he had been on shift for the last 18 hours.  Rooms were strictly double occupancy – every bed was filled – and breakfast would be served on the lawn under a giant canopy, until the dining room could be inspected for safety.  But finally I was able to settle down for the night.

The next ten days would end up being a blur.  I generally don’t write about my work on this blog, and that’s not what this post was intended to be about.  Instead, I want to share my impressions of the city as it appeared when I was finally told to take a day off, and I had the opportunity to walk around Kathmandu with a camera and meet some of its residents.  Following the blue line in the map below, I basically walked around until my camera battery went dead, came back to recharge (and change soaked shoes) and then headed back out again until the battery died again. This post covers the first part of my walk.

I would start my walk in Thamel, the tourist district filled with budget-friendly hotels, souvenir shops, and shops catering to backpackers and hikers.  Most of the shops were shuttered, but there were signs that things were beginning to return to normal (this was May 9, a full two weeks after the quake).  I bought a map from a shopkeeper who told me he had three houses in the country, and all had been flattened.  This was the first day he had been able to return to his shop.  Although many of the shops were beginning to open, there were only a handful of tourists, and people seemed surprised to see me (a foreigner) walking around taking pictures. 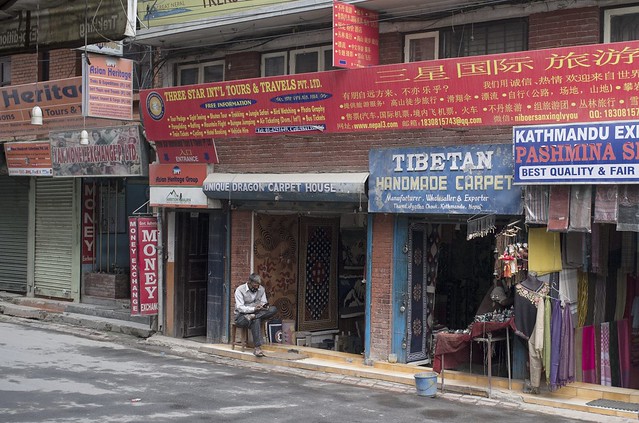 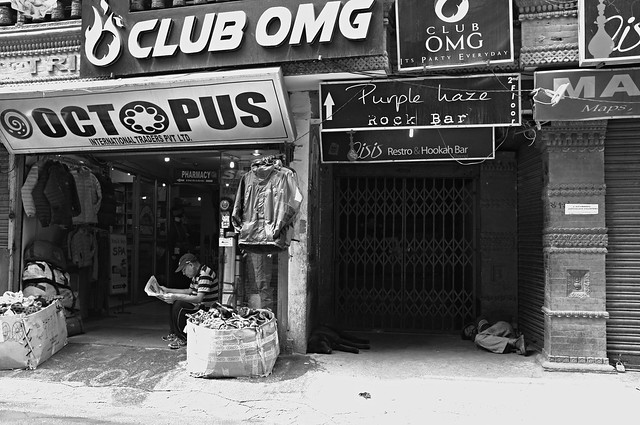 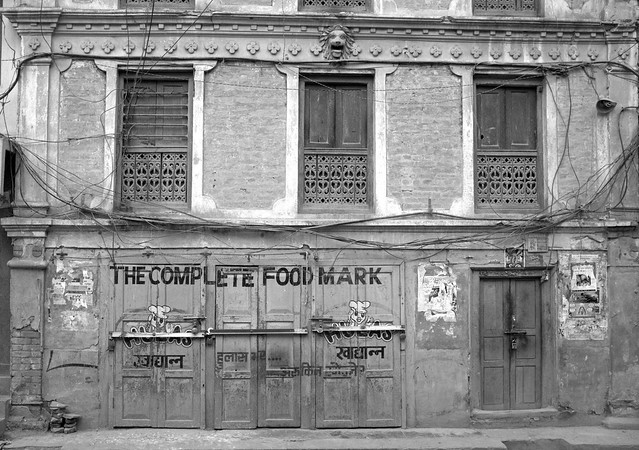 I continued to the west, where I would cross the Bishnumati River where it passes through Kathmandu.  This is a holy river that has unfortunately fallen victim to years of pollution and dumping.  The river slowly moves through the city as a sludge of plastic waste, slaughterhouse runoff, and algae – and the lower-income homes built alongside the river appeared to have suffered massive damage, likely because they are cheaply constructed, non-reinforced, 3-4 storey brick and mortar buildings.  People were picking through the rubble, salvaging recyclable metal and bricks, even as another family sat in plain view on the 3rd floor having a meal, with the entire outer wall of their dining room missing.  As gawkers stopped to take pictures on their mobile phones, I continued westward up the steps toward the Swayambunath hill looming in the distance.  On the way I passed these monks sitting in this makeshift shelter: 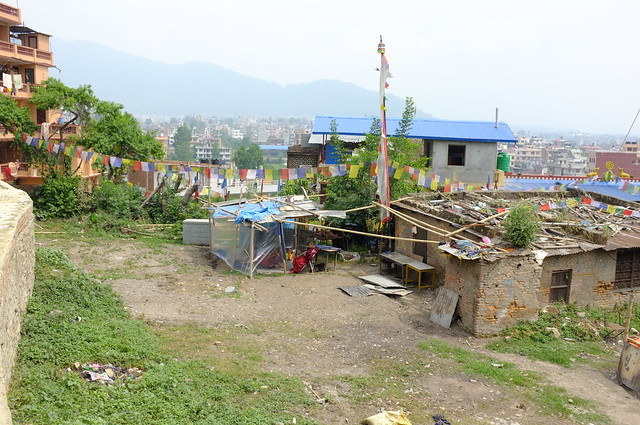 The Swayambhunath hill temple complex hosts a giant Buddhist stupa that dominates the Kathmandu valley, with several impressive Buddhist and Hindu structures, as well as what appears to be a monastery.  I saw plenty of evidence of the temple’s nickname, “the monkey temple” as I began ascending the 365 steps that lead to the stupa.  My hotel television had been looping a clip that talks about the stupa and complex on its “welcome” channel, and I was eager to see it in person. 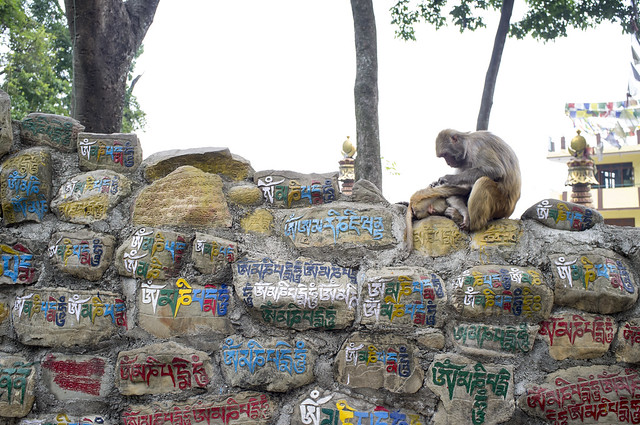 Unfortunately, about 60 or so steps from the top, soaking with sweat, I could see that sheets of wood and other debris had been placed across the steps, blocking entry to the largest temple. A young guy had been climbing the steps just behind me, and when he too saw the way was blocked, he pulled off to the side, and took some biscuits from his pocket to feed the dogs (and one monkey) hanging around the benches placed for people to rest along the climb. 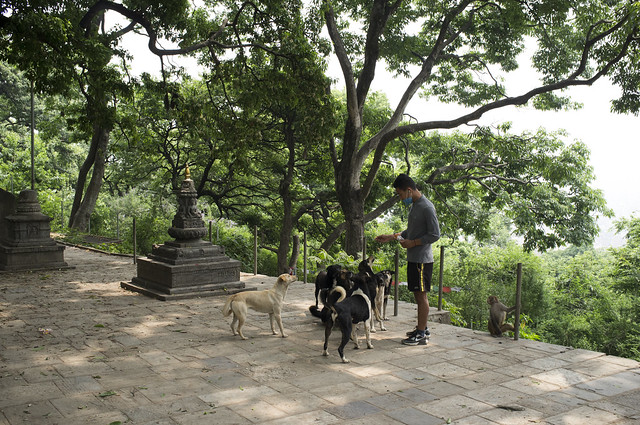 From there I spotted an opening in the wall lining the step area, and I followed this to a well-worn path through the forest covering the hill. There were monkeys hanging in the trees and playing along the path. I continued on the level trail which took me around to the back of the comples, where I saw there were other structures and lots of people hanging around, many in monk’s garb. 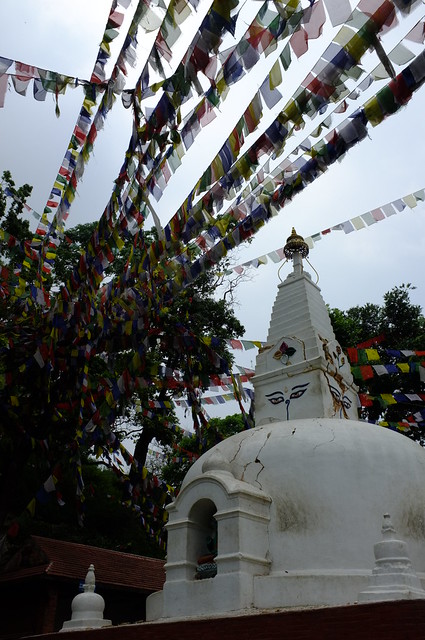 While all structures will still standing, it was hard to find anything that had not suffered at least some damage. 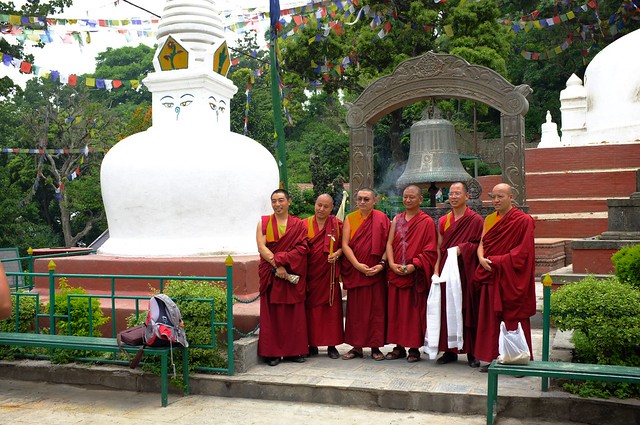 I guess I caught the attention of this elderly lady – I am not sure what distinguished me from the other tourists hanging around – and I gave a small donation in exchange for a photo. 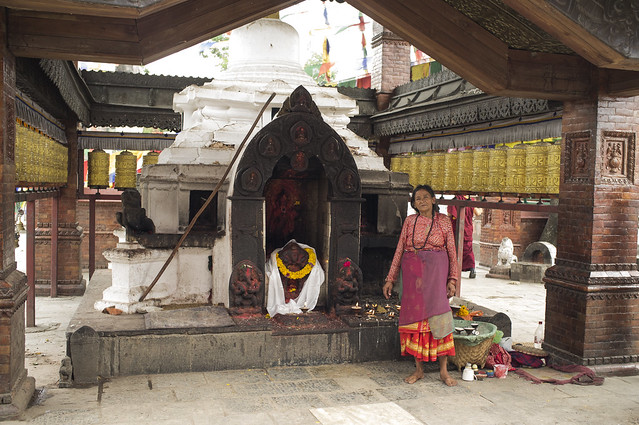 This apparently encouraged her, so she insisted I sit down while she mixed a variety of wax-like substances and added to my forehead the mark – often called the tilak and signifying the “third eye” – which is so common in Hindu and Buddhist cultures. As I sat down I quickly passed off my camera to a young guy who was there with his wife or girlfriend, and he did me the favor of snapping a few photos of the experience.

After this, of course she wanted more money, but I was running low on cash.  She was happy to receive instead the MRE I had in my backpack, however!

As I made my way down the hill – snapping a couple of nice panoramic shots of the city on the way – I passed another large temple or monastery with these endless prayer wheels built into the wall.  By this time I was pretty much lost, but luckily I had a GPS watch pointing the direction back to the hotel. 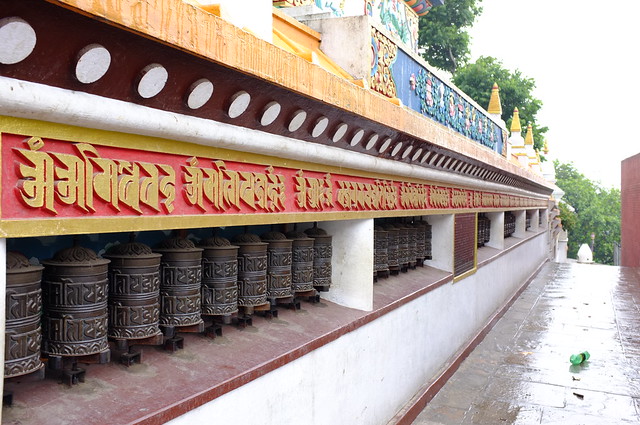 By this time it had started raining quite hard, but I had this handy raincoat in my pack – basically a plastic bag with arm- and head-holes – and I could continue on my way.  The locals thought it was pretty funny I guess. 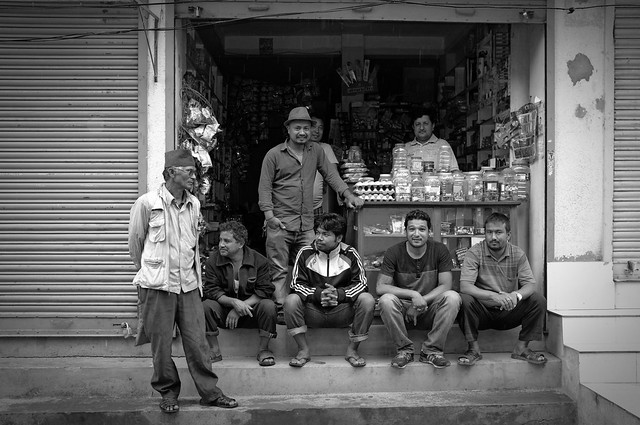 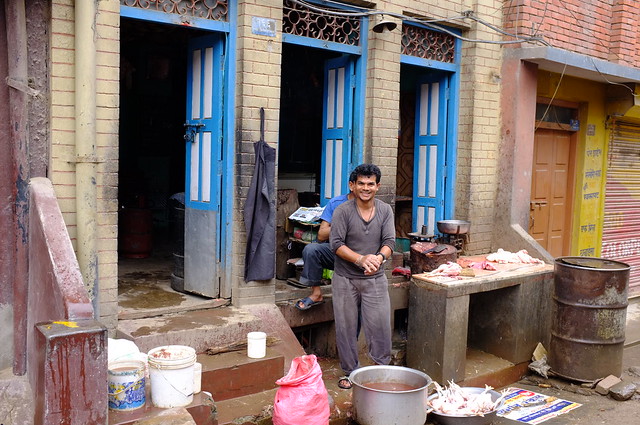 I passed the butcher above – plucking and cleaning chickens. Like many of the people I had seen that day, he gave me a smile, and tossed a scrap of meat to a dog who was waiting expectantly. These are two of the things that impressed me that day – the friendliness of the people – even those sifting through the rubble of their homes had a smile for a passing stranger – and the well-fed dogs.

As I continued to make my way through the rain, I realized my camera was out of battery power, so this was a good time to head back to the hotel for a recharge – both for the camera and for myself!