Life Goes on in Kathmandu (part 2)

Last week, I shared some of my photos and experiences from my two-week trip to Kathmandu, which was mostly just hard work post-earthquake, but I did get one day off toward the end of my time there and spent it walking around the city all day with my most recently-acquired camera.   This is the second half of that report. 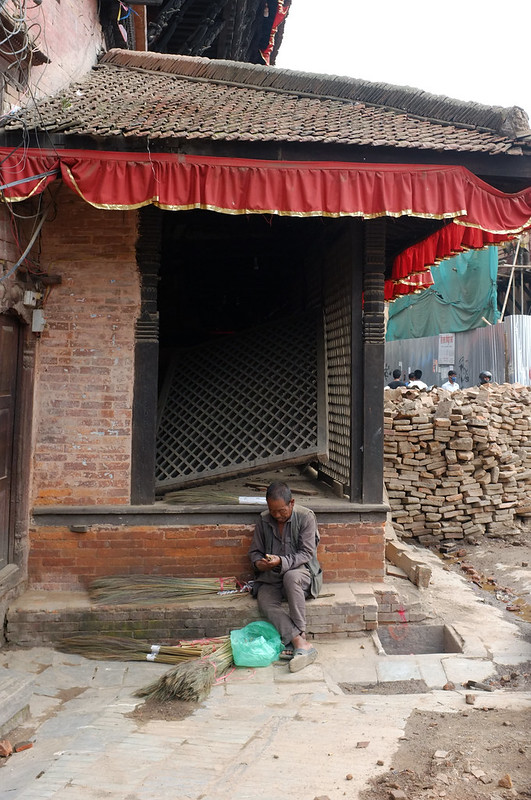 As noted last week, most of the “Gorkha earthquake’s” impact on individual peoples’ lives and property was felt outside the capital – in rural mountain areas.  The official death toll of the April 25 quake and the May 12 aftershock was 8,677, with as many as 20,000 hospitalizations.  But in addition to the human toll, Nepal suffered a massive cultural toll – and I stumbled across a significant part of it during my second photowalk that day.

The gentleman above sits quietly, making brooms on the fringes of what remains of Kathmandu Durbar Square, one of seven groupings of ancient buildings in Nepal that was severely damaged in the quake.  Unesco’s director-general, Irina Bokova, stated that no other natural disaster in modern times has caused so much harm to a nation’s cultural heritage. 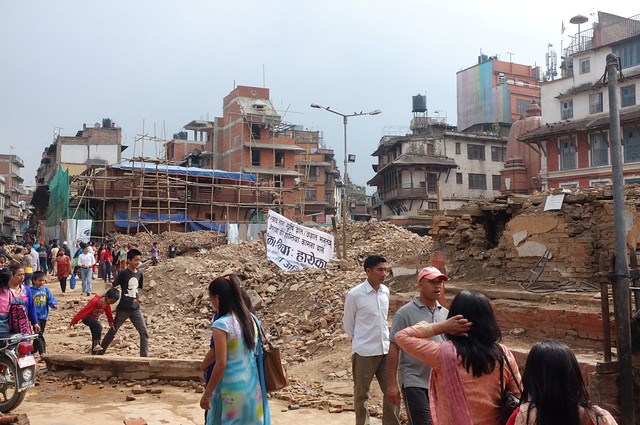 When I came upon the scene above, I couldn’t really picture what I was supposed to be looking at.  There were piles of rubble and timber everywhere, and people were walking through the area, many of them taking pictures and climbing on top of the rubble.  I saw several pyramid-like brick structures and the severely cracked remains of an old palace: 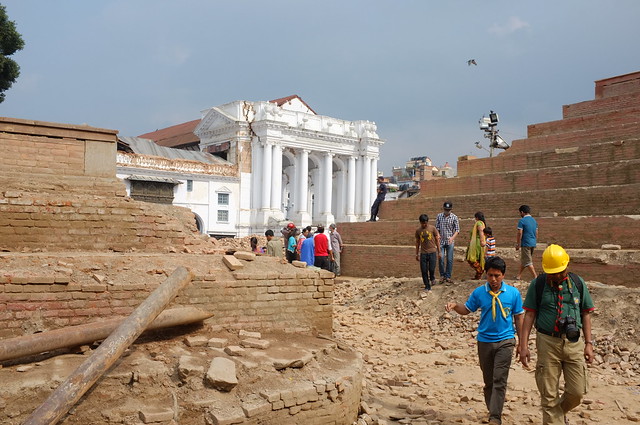 It wasn’t until later that I was able to make sense of what I was seeing, as I looked at older photos and realized that the “pyramids” had actually been the bases for the actual structures, which were now completely gone.  You can look at this picture and this picture for comparison.  I stopped for a coffee at this Himalayan Java – sort of like Nepal’s Starbucks – and completely untouched on the edge of the square, and wondered, probably like the lady below, how much of the site can be reconstructed, and to what end?  This article talks a bit about efforts to save what remains. 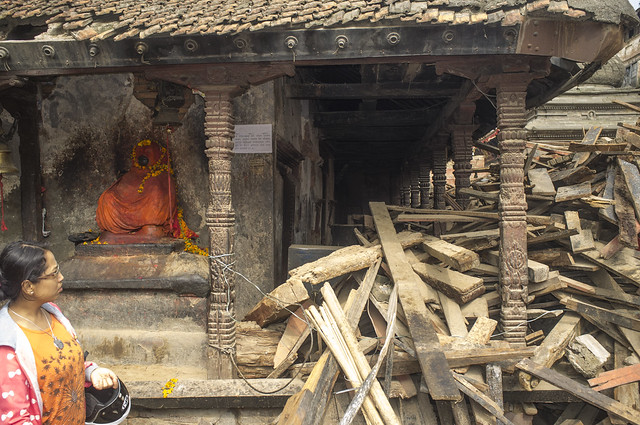 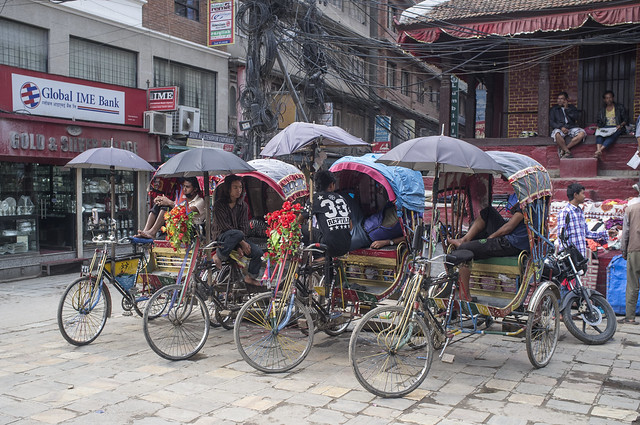 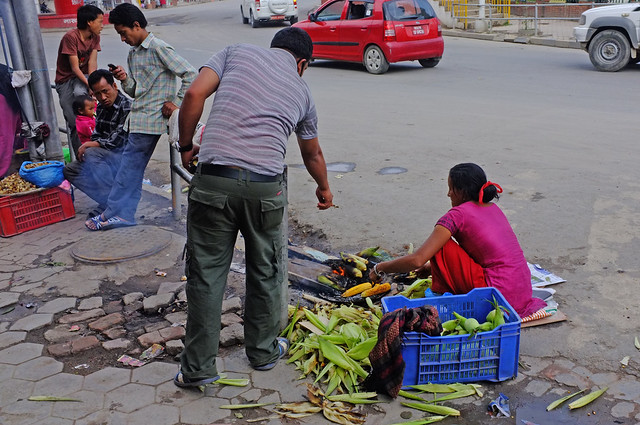 The woman above was in a group of street vendors – and was most literally a street vendor, as she had used sticks and scraps of wood and paper to keep a small fire going in the gutter at a major intersection, where she roasted ears of corn (maize) which were being regularly purchased by passersby.

As I was walking around taking these pictures, the 7.3 magnitude aftershock had not yet taken place. And I worried, because everywhere I walked I would see buildings that appeared to be precariously propped up with beams or poles: 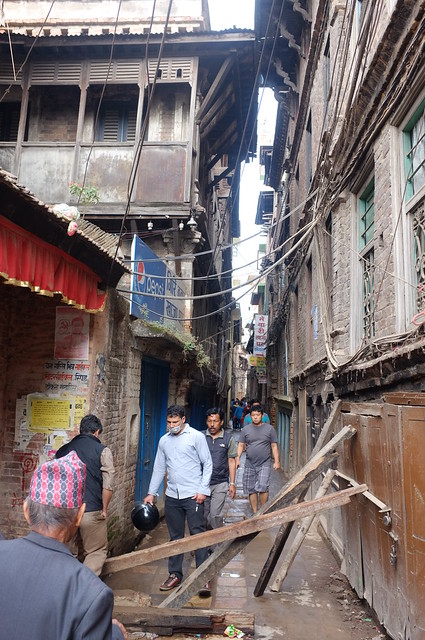 And yet after the 7.3 aftershock, there was little additional damage in the city – or so I am told. I walked through the Thamel tourist district the day after that tremor, and the shops were shuttered but I am told things returned to normal pretty quickly within days (I left Nepal the day I snapped the photo below). 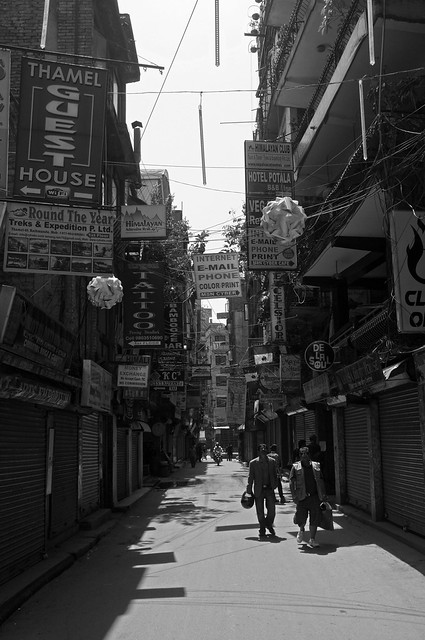 On my final day in Nepal I had a meeting in town and walked around for an additional hour. I bought an “I (heart) Nepal” t-shirt from the guy below, who was concentrating on the embroidery of an NGO’s name on this vest. 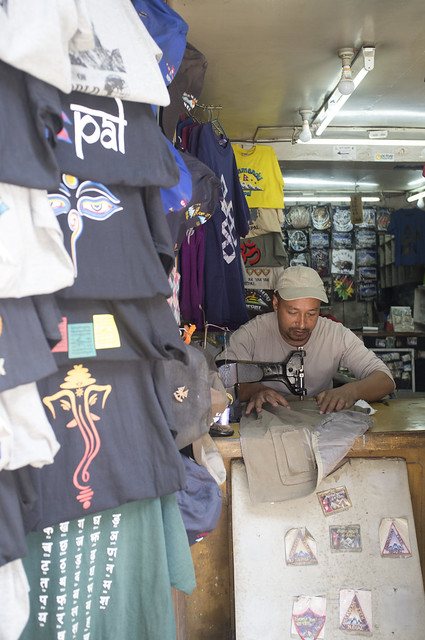 As I was watching him work, I noticed he had embroidered the word “CHLID” on the vest (rather than “child”) and tried to tactfully point this out to him, to spare him any problems later. Only then I noticed he had a pile of 25 or so sitting next to him already done – all incorrectly. So I got kind of a mixed response.  “Better that he hear it from me,” I thought.

I also stopped to chat with this lady, who was sitting at the Bhoudanath stupa, which someone encouraged me to go and see, but I didn’t really find all that impressive, honestly. Culturally important, I’m sure. The stupa follows.  Believers walk around it and spin the prayer wheels that you can just make out in the wall. 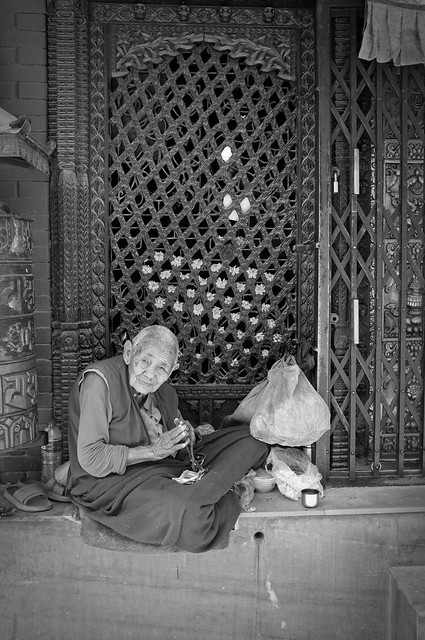 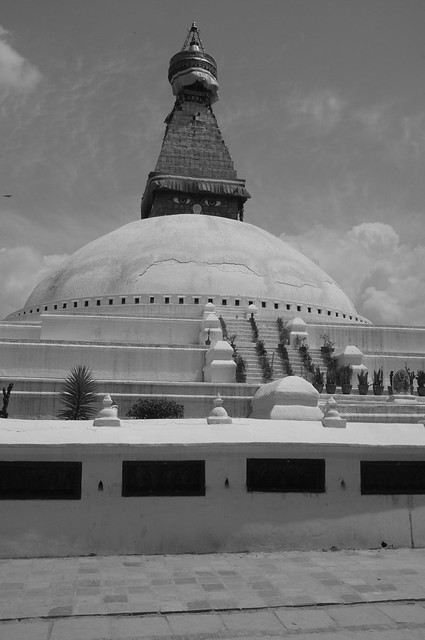 After that I walked for a mile or two until I finally had to grab a cab and head in to prepare for my trip home. A few interesting scenes from that walk: 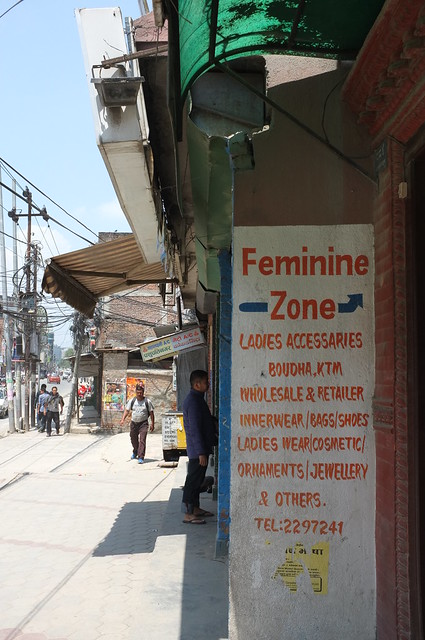 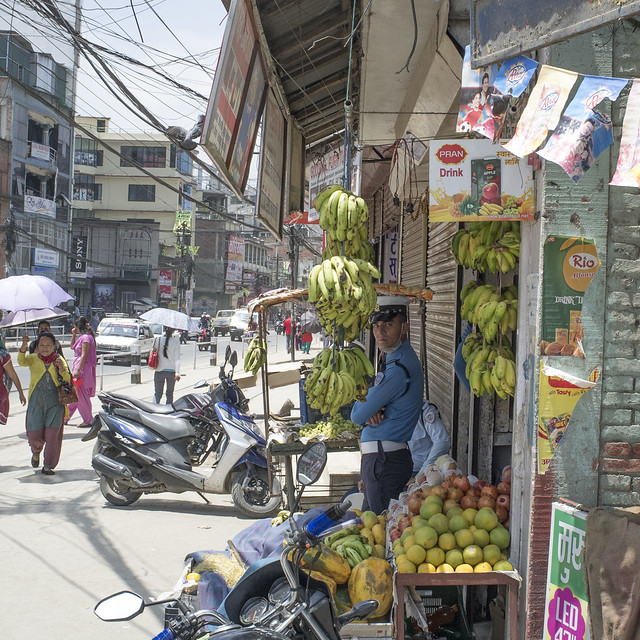 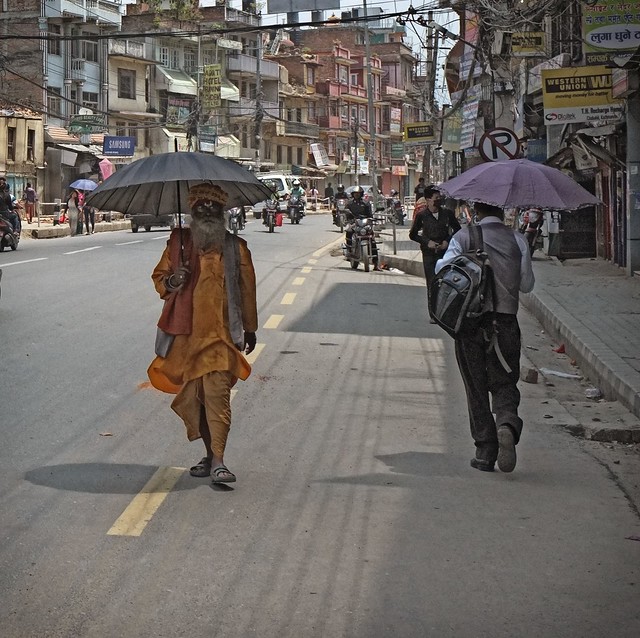 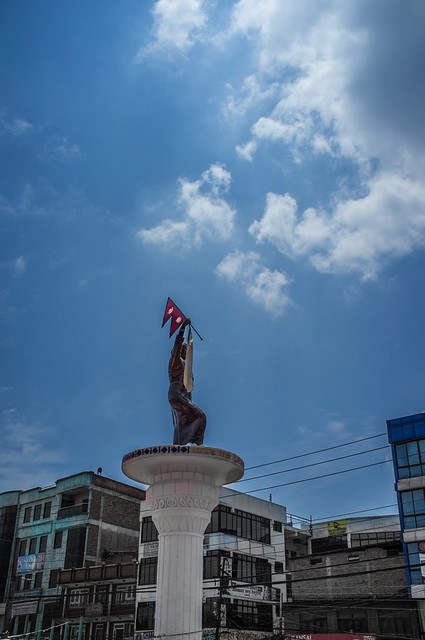 I couldn’t tell if it was intentional, but this unidentified statue had a shopping bag dangling from the hand holding the Nepal flag. 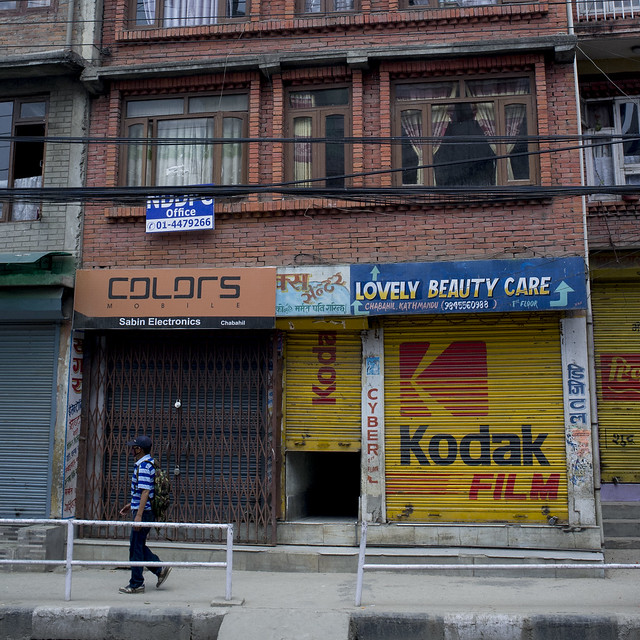 I’ll close with this view from Swayambhunath. You’ve seen most of the photos I posted, but if you’d like to see the rest, you can check out the complete album on Flickr. 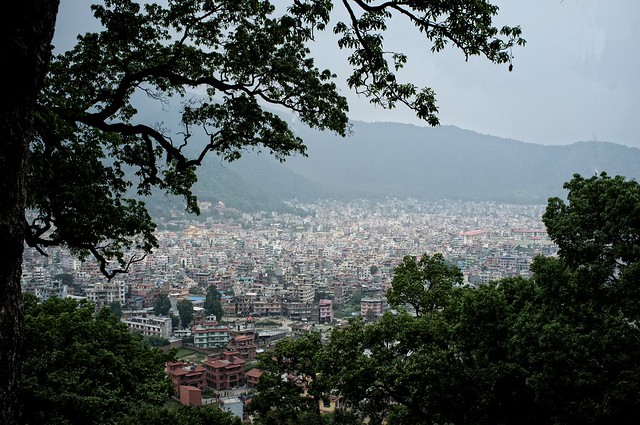