I’ve been pretty quiet here on the blog – we have been hard at work on some crowdfunding initiatives, and in between, I have been editing some of the video footage I shot on our trip to Madagascar’s west coast.  Way back in August!  That’s when we took a trip that most foreigners who spend a few years in Madagascar save until late in their time here, because of the relative difficulty in reaching this place.

I’m talking about the Tsingy de Bemaraha – the weird rock formations in the west, that require a day’s drive down dirt roads, several eye-opening ferry rides…but that’s not what I’m writing about today.  Instead, I want to share a bit about some pretty amazing trees that grow near Morondava, which is the jumping-off place for most people when they visit the “tsingy.” 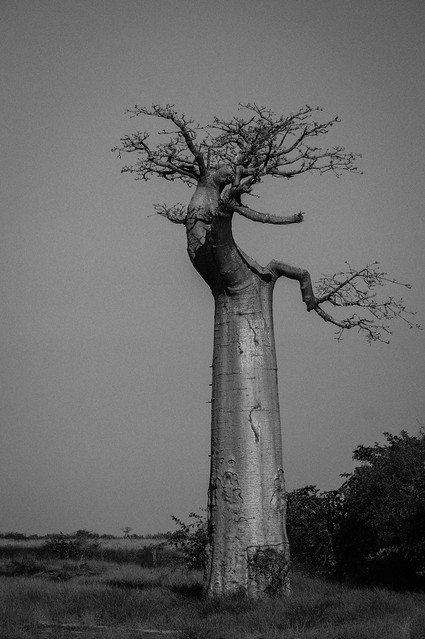 Most people have heard of baobabs and the stories and myths surrounding the baobab tree.  But what a lot of people don’t realize is that the “typical” baobab tree that people imagine is probably one of the two species that live on mainland Africa.  But there are six additional species that appear only on Madagascar! (Plus one in Australia, but that’s for someone else’s blog).  In addition to its odd shape reminiscent of a tree that was uprooted and stuck back in the ground upside down, the baobab is known for its gourd-like fruit that allegedly contains more iron than red meat, more potassium than bananas, among other qualities.  You can buy it in powdered form and add it to healthy smoothies.  And it provides material to produce paper, rope – and of course wood – but it’s a shame to chop these giants down!  Plus, if you’re into limericks, here’s a list of words that rhyme with baobab (good luck with that Pulitzer).

We spent two days driving west from Antananarivo.  We left our 20-year-old, just-arrived-in-Madagascar Land Cruiser in the driveway and paid for a rental (with driver, because that’s how it works here) because the air conditioner in the Land Cruiser was broken.  As it would turn out, we hadn’t even left Antananarivo when the air conditioner made a loud “chuff”….and that was the end of the cool air.  But by now we were in a race against time to make it to our overnight stopping point before dark (it’s unsafe to drive in Madagascar in the dark) so we couldn’t afford to turn around and get the vehicle replaced.  So on we went.  Except now we were riding in a crappy Mitsubishi with worn shocks and no a/c, rather than a Land Cruiser with no a/c, which would have been marginally better. 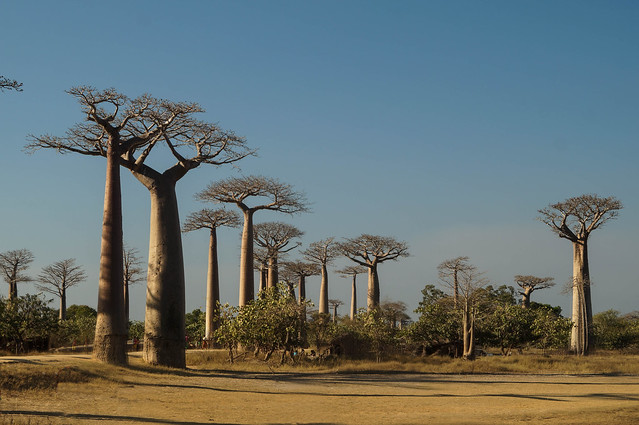 We eventually made it, and the next morning, set out again.  All day long we drove, constantly reminding the driver to slow down in the villages and getting irritated as we sweated in the hot sun.  In one village, he ran over a chicken at 50mph and when I asked him, “was that really necessary??”

He protested, “but if I slam on the brakes…”

“You didn’t even take your foot off the gas!!” I responded.  And on we drove.  As we got closer to Morondava, he proudly told us that this was where he was from.  “Great,” I said, thinking there was no way we could get lost.  He pulled over in one town, jumped out of the car, and ran into a gated compound beside the road.  A few minutes later, he emerged smiling.  “I wanted to say hi to my brother.”  Later he pulled over to hand a mystery bundle that had been in the back of the car with us to an unidentified person.  But the strangest thing was when he kept stopping to ask for directions (“isn’t he from here??”) until we finally had to explain the concept of Google maps and iPhones to him.

As the sun started to sink and we recognized that we would make it to Morondava by sunset, we drove through a vast, flat lowland area that had solitary baobabs popping up here and there for as far as the eye could see.  So I had him pull over as the sun neared the horizon and cranked up the 3DR Solo drone:

The villagers as well as passersby found this fascinating, and cars, buses, even oxcarts pulled over on the road as people crowded in to see what I was looking at on the iPhone screen.  The first time I landed the drone, the villagers scattered in a panic, but as I tried to put it away, they began insisting I launch it again.  So I did.

Eventually we would make it to Morondava and settle down for the night in a pretty decent hotel.  But the real attraction in the region, as far as baobabs are concerned, is the Avenue de Baobabs, just 10 km away and on the road to the Tsingy de Bemaraha, our destination the following day. 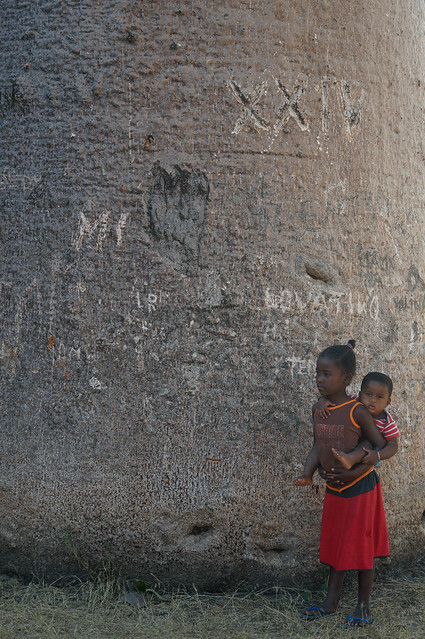 Now, the tourist websites will tell you that the time to visit the baobabs is at sunset – and there is certainly something to be said for the views you can get here in the evening with the lengthening shadows.  But now I am going to offer your FREE BAOBAB TRAVEL TIPS.

For me, the best time to be here is at sunrise. Why? Because at sunset, there will be tens – maybe a hundred – tourists walking all over the place, the kids from the local village will be trying their best to get you to pay them for the privilege of taking their photo, and all of your pictures will be crap because there will be people all over them. In the morning, however, the shadows are just as long, the light is just as orange, but you’ll have the place to yourself. A few enterprising young kids will be out there showing you the odd chameleon on a sticks, but the parking attendant won’t even be there so you can pay the 2000 ariary (about 67 US cents) for parking/admission. You can pay him on the way back in a few days, when you’ll also want to stop by the gift shop, which is also closed in the morning. 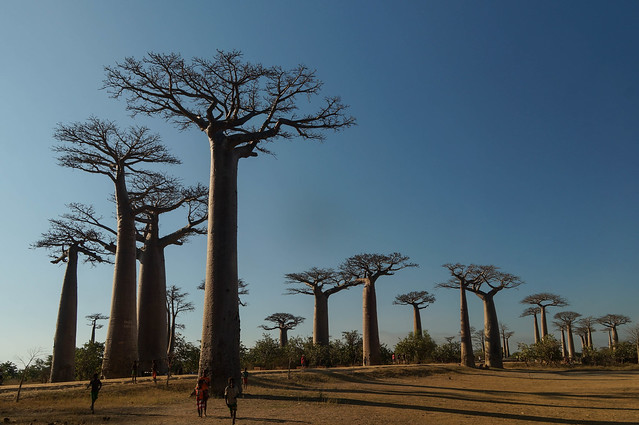 But by now you can probably guess what I did when I got there in the morning, on the way to the Tsingy, and saw not a single other person there, right?  Yup – I launched the drone again.  Here’s that video: