This post is a continuation of my previous post, where I described out trip from Antananarivo to Morondava, and then north across two rivers and to the “petit tsingy” and a boat ride through the Manamobolo Gorge and the caves that border it.

In this post, I will share our experience in the “grand tsingy” and give a few tips for the ride home. 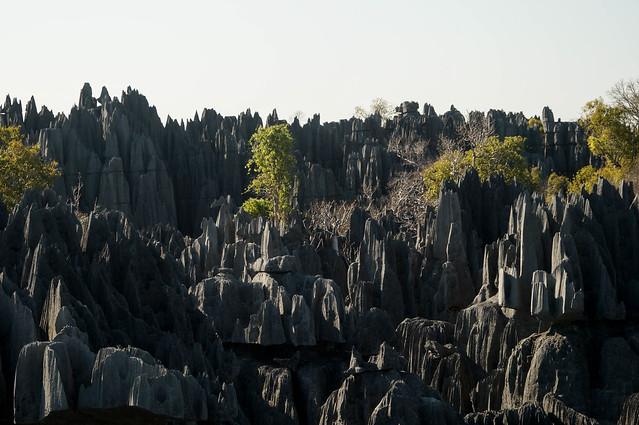 So there’s a trick when you visit the Grand Tsingy. We didn’t realize it until later, but our guide told us he was getting up at 3 am to “get our harnesses.” Apparently there weren’t enough for all the visitors or something. He encouraged us to push the lodge we were staying in (Orchidee the Bemaraha) to prepare breakfast as early as possible. Officially they started at six, but at our request, they had a simple breakfast, along with bag lunches, ready for us by 5:30, and by 6 we were on our way. 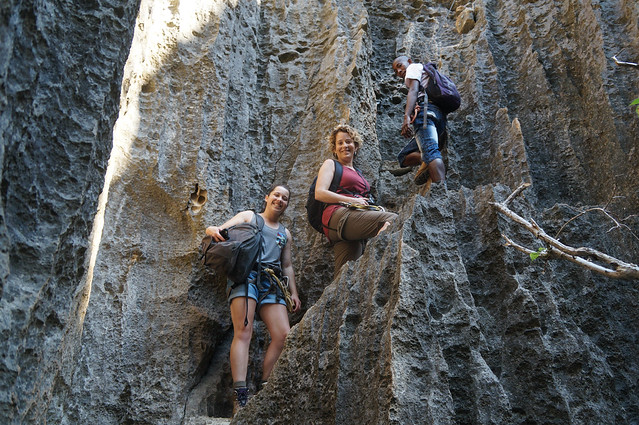 When we got to the park – if I remember right, it took an hour or so on a bumpy road – there was only one other car there. We walked on the forest floor along towering cliffs, and promptly spotted a pygmy kingfisher – one of two types of kingfishers found in Madagascar, and by far the least common. 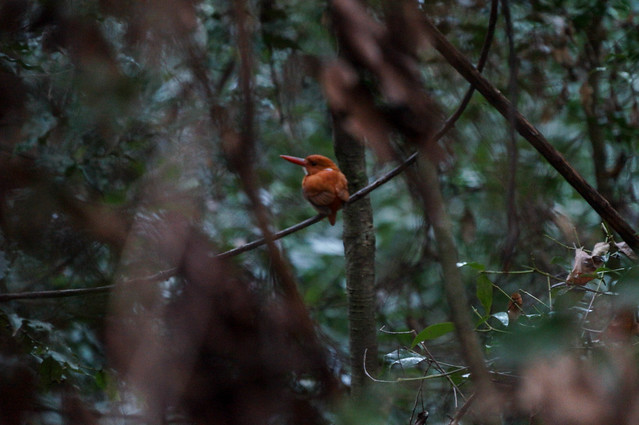 Once we turned inward toward the park, it was time to start climbing metal ladders and clambering through rocks. And time to put on our harnesses. The harnesses each had a metal carabiner, and we were supposed to clip those into metal cables that were stretched across some of the more precarious/dangerous stretches. This video gives a bit of a better impression.

It was pleasant and cool. We took our time, took photos from some of the highest parts of the tsingy. 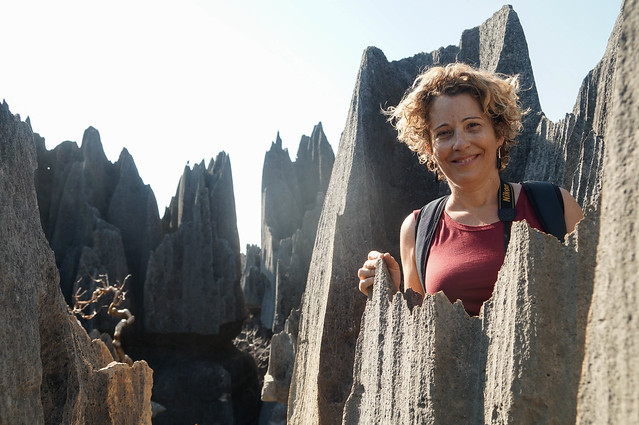 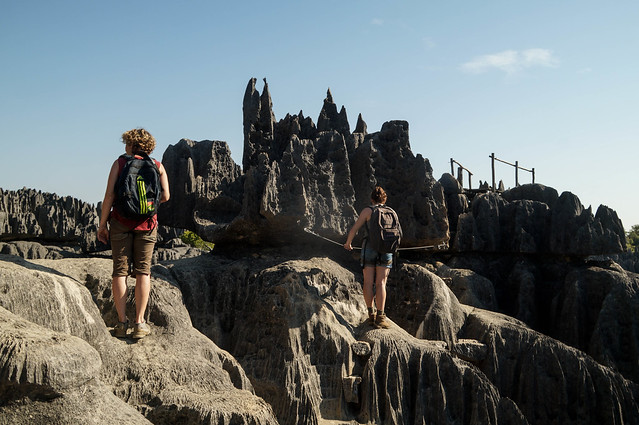 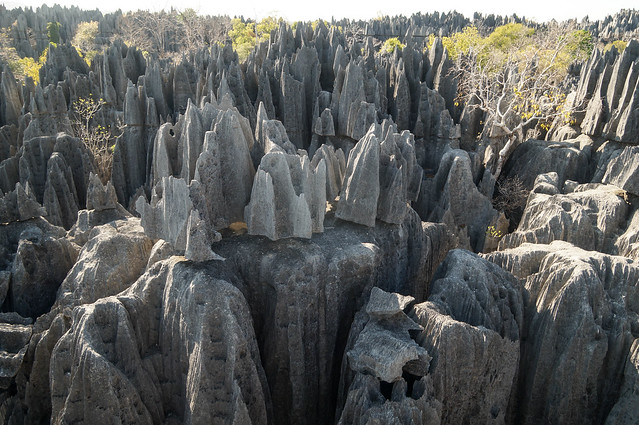 As we started to make our way downhill, we eventually ran into a group of people waiting at the bottom of one of the metal ladders, and we realized the whole point of getting up early for the harnesses.  The people who had not gotten harnesses had to navigate the loop backward, and then wait for those of us who had gotten up early to come around and pass on our (sweaty) harnesses.  So we felt pretty lucky, passed on our harnesses, and continued on. 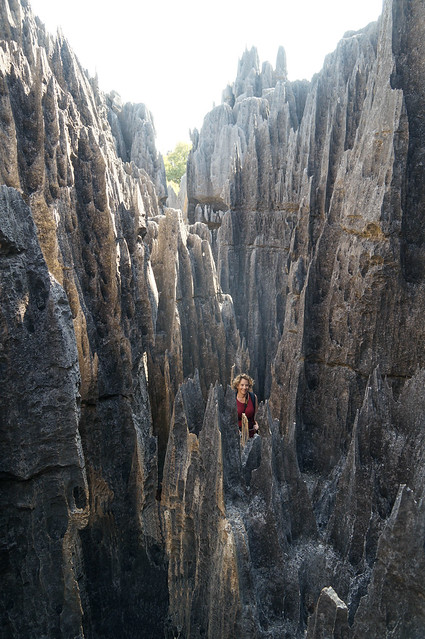 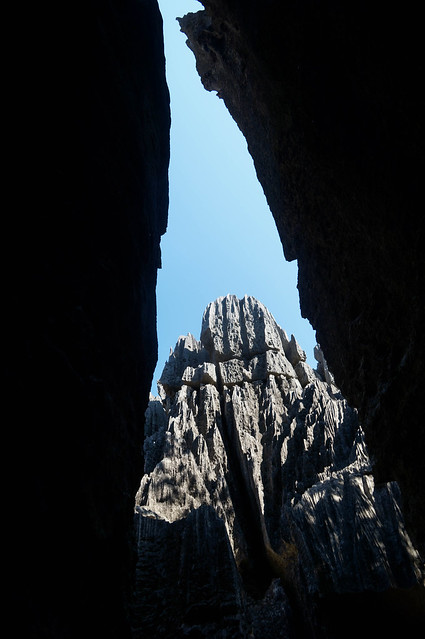 As we continued on, we passed larger and larger groups, laughing and joking, blithely heading forward to the point where they would have to stop and just wait for someone to show up with a harness. Then they would have to go in small groups and wait for the preceding groups to finish with the platform up ahead. A long day – and it was getting steadily warmer. Meanwhile, we were making our way through the canopy, spotting the lemurs overhead which the other people seemed to be missing somehow.

Once we got to the parking lot, we were starting to get hot and uncomfortable. And it was packed with cars – at least 50, crammed every which way, several drivers were working to repair their 4×4 while their occupants were on the trail – and at this point we realized how important it had been that our guide had gotten up at 3 am to secure our harnesses and prod us along the road to the Grand Tsingy. If you come to the Tsingy, tip your guide well, and make sure he does this for you.

We headed back to the lodge, and lounged by the pool, ordered up a few $10 massages, and relaxed until dinner, and tried not to think about all the other guests who were still out in the heat. Bear in mind, this is winter in Madagascar!

The next day, we again took our guide’s advice, and got up well before 6 am and headed out as the sun rose. Why? Remember the river crossings. It didn’t take long to get across the Manambolo river, but once we got to Belo Tsiribihina we knew things would be different.  We were looking forward to the Mad Zebu, but we knew our driver would be arranging the ferry crossing.  Instead of driving down to the river, the ferry “fixers” were in town and they seemed to have some sort of planned sequence in their minds.  Once we paid them, they directed us to a different part of town, to an unmarked river landing, where we waited for 20-30 minutes.  We got several different explanations for the delay but eventually were loaded on the ferry and were on our way.  By the time we left, traffic was starting to back up and we were thankful we had gotten up early.

After a relatively uneventful, but hot and dusty ride, we would arrive once again in Morondava at the hotel we had stayed at a few days earlier.  Great place to walk along the beach at sunset and recharge for the long ride home to Antananarivo.

You can see all photos from this trip in this Flickr album.