Of all my cameras, this has probably been one of the most difficult to work with.  But once I figured out the problem, I firmly kicked myself.  A couple of times, for good measure. 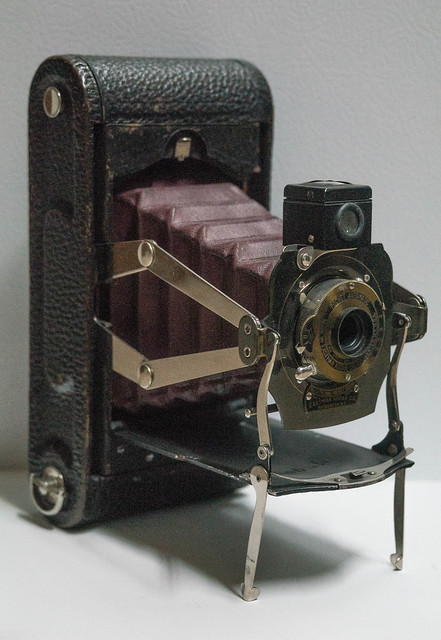 Made of brass, wood, stainless steel and covered with leather, this 1906-1912 folder with red leather bellows is a beautiful camera.  It has four aperture settings, marked simply 1 thru 4, and I, B and T settings.  The finder flips sideways for landscape photos and the back cover slides off when you release a latch and takes 116 film. 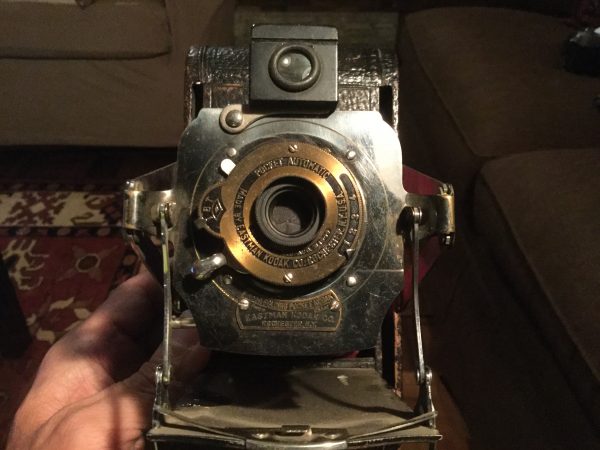 And I’ve been trying to get it to produce some decent photos for quite some time. Initially, the lens was sticking.  There is a tab you can press which allows you to pop the entire lens/shutter assembly right off – something I’ve never seen on any camera – and I took it apart and tried to clean and repair it.  No luck.  Irritated and frustrated, I eventually decided to look for the exact same camera on eBay and ordered a second copy.  The second one works like a charm, and you can contact me if you’re willing to pay 30 bucks plus shipping to put the first one on your shelf.

With 116 film there’s generally no issue, but you have to spool 120 film onto a 116 spool with intact backing paper in complete darkness.  These spools with backing paper can run you 10 to 20 bucks on eBay, so you want to be careful with them and reuse them as many times as you can.  You end up losing a few millimeters at the top and bottom, but it’s pretty much the same size and the numbers line up in the window correctly.   For the technical folks, 120 film is about 60mm wide and 116 film was 70mm, so you lose 5 mm at the top and bottom.

So once I had a working shutter, I probably ran three rolls of film through this camera, and every time, but the 2nd or 3rd frame, the film would stop advancing and I’d realize the backing paper had torn.  Each time, I would take out the film and carefully examine the camera to try and figure out where the backing paper was catching, without seeing any obvious causes.  And go on eBay and order a new spool with backing paper, of course.  There’s only so much packing tape repair you can do before it’s time to just throw it out.

And then finally I noticed the fine print on the wooden cross piece.  “Start the paper under this cross piece.”  Printed on both sides in tiny black letters.  Which my 50-year-old eyes hadn’t noticed.  So the next roll I followed the instructions, and the camera worked like a charm.  And I kicked myself again. 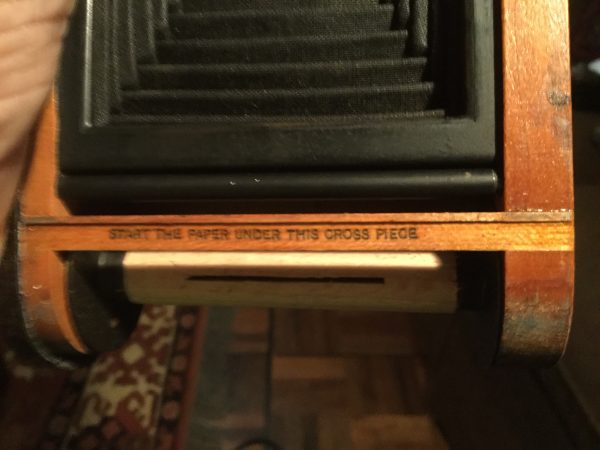 Once I sorted out how to work it and got a working shutter, the camera worked beautifully.  I shot a roll of Tri-X 400 through the camera and for unexplained reasons most of the shots were ruined, but then ran a roll of Fuji 400H color film through it and everything worked out fine.  There is a light leak somewhere I haven’t managed to diagnose (it’s not the bellows) but if you take a bit of care to keep the camera out of unnecessary sunlight I think it will be fine. 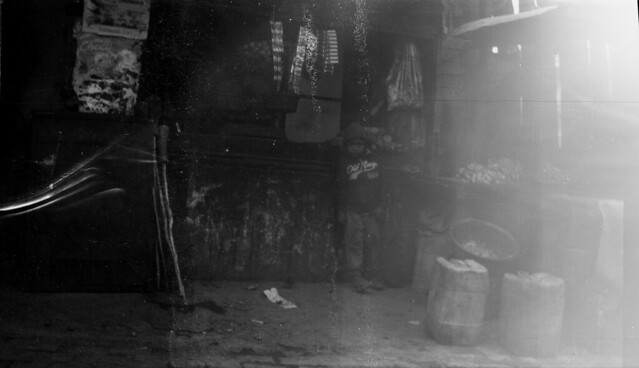 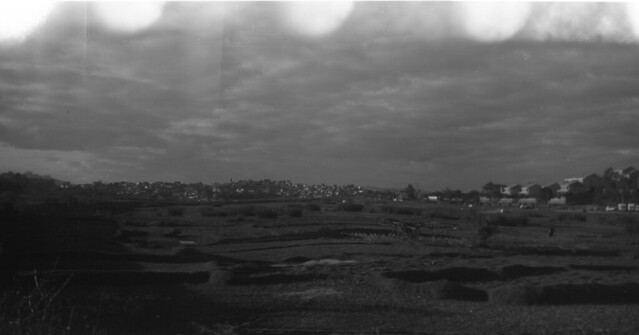 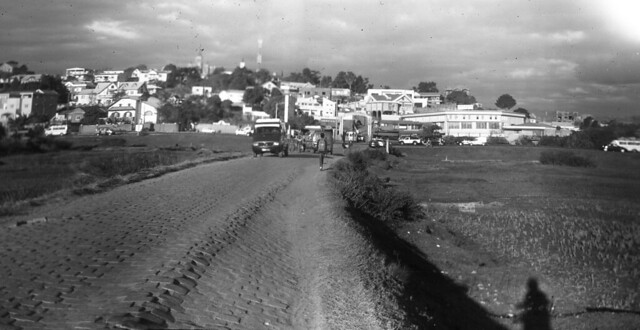 Some of the photos lack sharpness, but it’s interesting to note how sharp the third b/w photo is in the near areas of the scene. This camera has no focusing mechanism, so smaller apertures would generally be better. Noting the earlier remarks about the apertures being marked 1 thru 4, the number one aperture is surprisingly large for a camera with no focus mechanism. However, I kept forgetting whether #1 or #4 were the largest aperture, and so therefore shot nearly everything on #2 or #3. 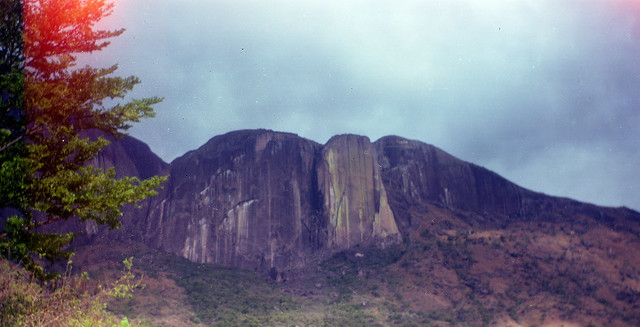 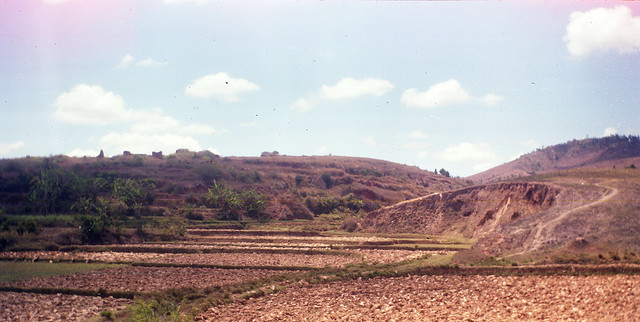 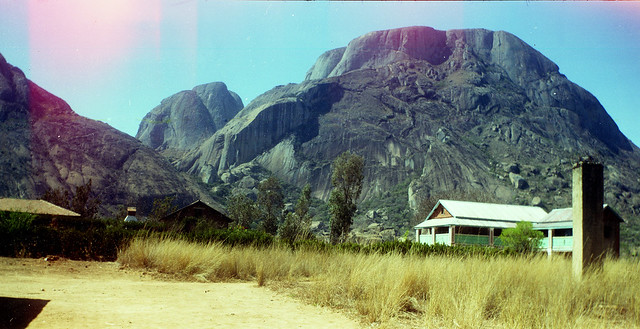 In the above photo it’s clear that I wasn’t aiming the camera correctly.  The mirror in the finder was corroded.  My solution?  After I finished developing and scanning these photos I swapped out the mirrors of the two cameras to make one that works properly. 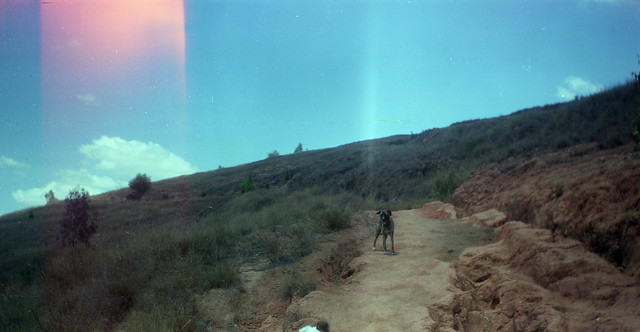 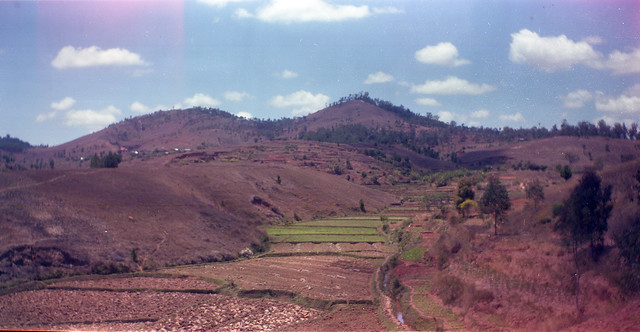 In the color exposures we can see the same tendency of the foreground to be sharper than distant objects.  If it’s calibrated correctly, I’d guess the manufacturers imagined the owner of the camera would mainly be shooting scenes between 10 and 25 feet – i.e. portraits and family scenes – rather than landscapes with distant mountains.

But – and I admit I should have done this before shooting these rolls – as I was scanning these pictures I noticed some dust (or fungus?) on the lens and did some cleaning – and in the process noticed that the lens was partially unscrewed.  The two or three turns I tightened it may make the difference for landscapes.  Fortunately I had a second version of this camera to compare to, or else I’d never have known.

The camera is fun to shoot and is clearly still capable of taking decent photos, even after 110 years.  The amount of detail in these 150 MB negative scans is amazing, and now that I’ve adjusted and cleaned the lens, as well as fixing the finder, this camera may take even better photos, with sharper focus at infinity distances.  I plan to try one more roll of color film – once I’ve determined where the light leak is.

This entry was posted in Vintage cameras and tagged Kodak, landscape, Madagascar, No. 1A Folding Pocket Kodak, vintage. Bookmark the permalink.