This Christmas, several of us got things like lenses and other camera-related items in our stockings.  So it was quite natural that we decided to take a “family photowalk” on Christmas Day, especially given that we are living in a foreign country, far from the close friends and family we might ordinarily be visiting over the holidays.  We had the pleasure of being accompanied by two of our most avid Indian photographer friends, one of whom suggested the site of our walk.

He took us to “T. Nagar” – which stands for Theagaraya Nagar.  T. Nagar is one of the busiest shopping districts in Chennai – and is considered the biggest shopping district in all of India, by revenue.  And while many people celebrate Christmas the way people in predominantly Christian countries celebrate the day (and it is a holiday here fyi), it seems that there are also many who, rather than staying at home with family and friends, go out shopping.

So it turned out that we ended up in one of India’s most busy shopping districts, on one of the busiest days of the year.  Trying to take pictures.

It ended up being a bit chaotic – keeping track of each other, and keeping a constant watch for that magical photograph.  And it turns out that on a photowalk, there is such a thing as too much of a good thing.  And we didn’t end up getting all that many photos.  I was able to test out the 50mm prime lens I had gotten in my stocking.  Zooming was unnecessary – in fact I had to look for ways to increase the distance between my camera and my subjects.  But I did find that, unlike my usual 18-200mm lens, a 50mm lens simply lends itself to portraits – both in terms of alignment and subject matter.  Here are a couple of the good ones I got:

A side note on the second photo – it has been a “brisk” 75 Fahrenheit the last few weeks. Temperature is a relative thing, and wool hats and earmuffs have become a common sight.

And finally, here is the photo I wish I had gotten.  I’m not sure who it belongs to, originally – it has made its rounds on the internet.  It could have easily been taken on the streets of Chennai. 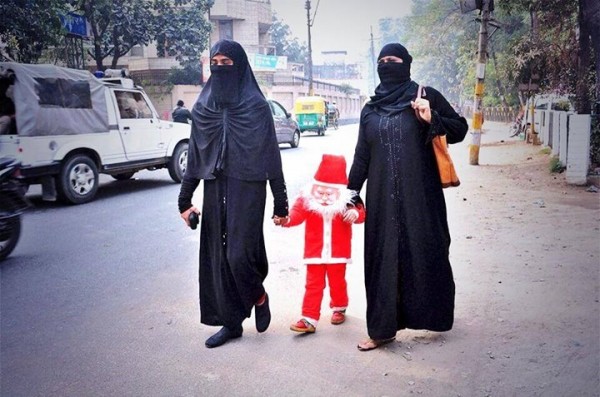 All the best this holiday season, however you choose to celebrate.

This entry was posted in Life in India and tagged Chennai, Christmas, photowalk, shopping district, T. Nagar. Bookmark the permalink.