Children of the Street: Ankorondrano

A group of about a dozen kids gathers on a small patch of green with a few benches and trees.  Basically a large roundabout.  Imagine an oblong Dupont Circle, except Starbucks is 3,000 miles away.  The sound of traffic is constant. 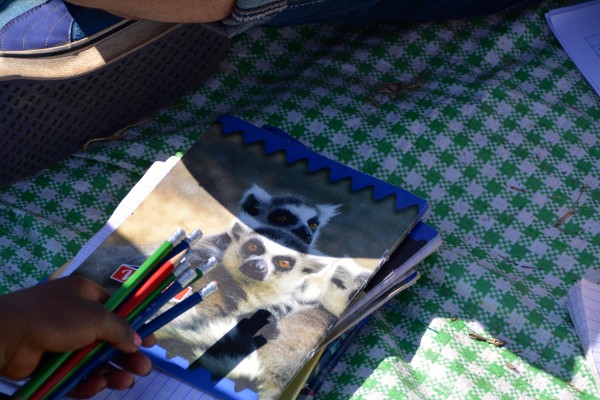 Two young volunteers lug a bag of supplies to a cement bench and quietly confer over a stack of French-style notebooks decorated with the image of a ring-tailed lemur, or “maki.”  They give the kids a folded vinyl tarp, which they spread out.  It happens to be a large tube, so they take a few minutes gleefully crawling through it.  Blue lanyards are handed out to identify the kids who officially form part of the program from the kids who just wander by and decide this looks like fun.  Some of the students carry young siblings.  They too receive a lanyard, so they don’t feel left out. 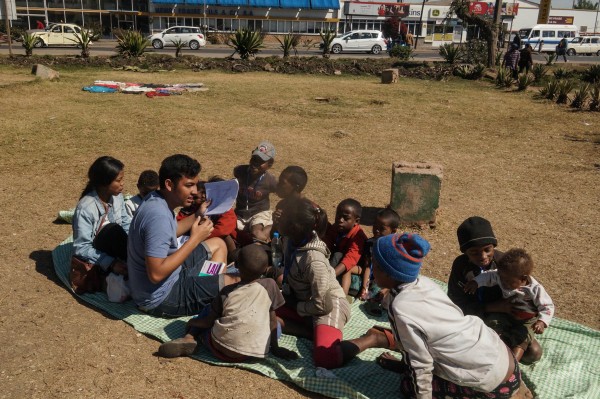 The kids are curious about the two camera-wielding foreigners who have showed up this week.  They strike poses and jump in front of the camera in an effort to be photographed.  Eventually they settle down and forget about us.  They are divided into two groups.  The younger kids are given plastic slates and chalk, and they learn about letters and the sounds they make.  The older kids are spelling longer words and learning basic phrases in French – a language they would ordinarily learn in school, and one which will prove critical in their adult life, but until now they have rarely used.  About 50 feet away, a homeless man sleeps under a bush.  Laundry is drying on the grass as traffic continues to circle the small park.  For a couple of hours, the kids are focused on learning. 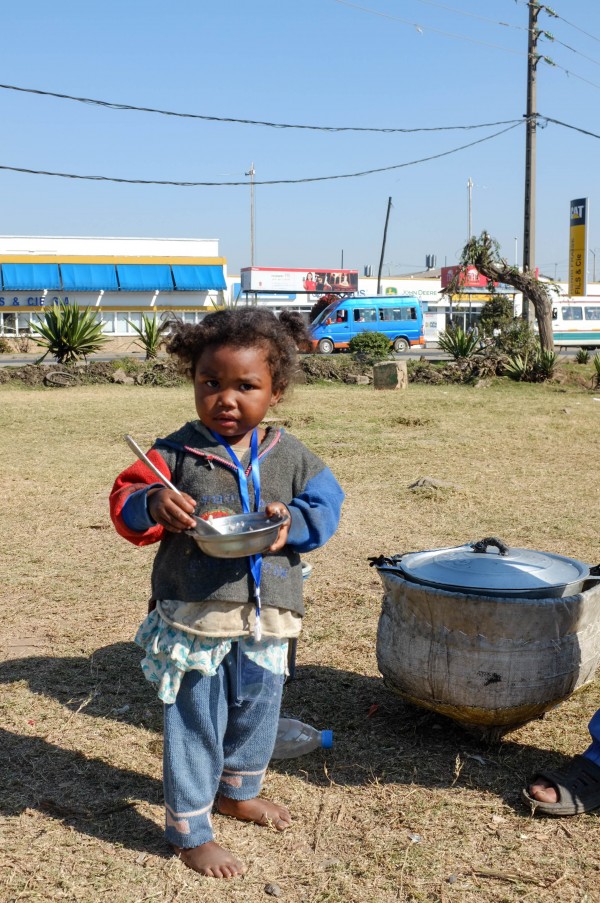 A man comes by with a large metal pot.  A few of the kids have a few crumpled Malagasy bills, and he serves them a bowl of a rice-based dish that looks a lot like oatmeal.  They step to the side and quickly eat, handing back the bowl when they are done.  A bit of water is poured in the bowl, he swishes it around and throws it out.  Fills it with the next serving for another kid. 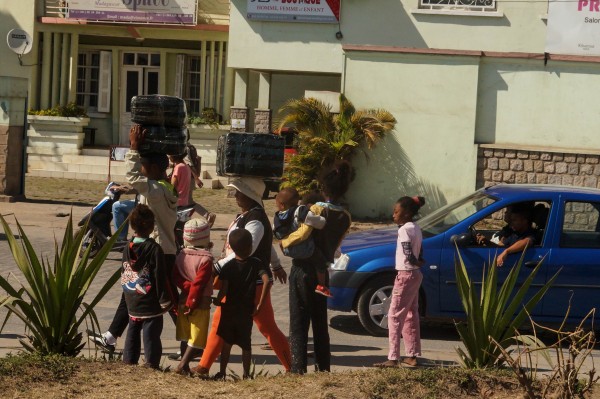 Suddenly, car horns honking.  A wedding!!  A dozen cars, all honking, follow another festooned with flowers and a happy couple inside.  Most of the kids run over to see the happy bride and groom.  Then they’re back on the tarp, to hear what their “zoky” (big brother/big sister in Malagasy), or teacher, has to offer them next. 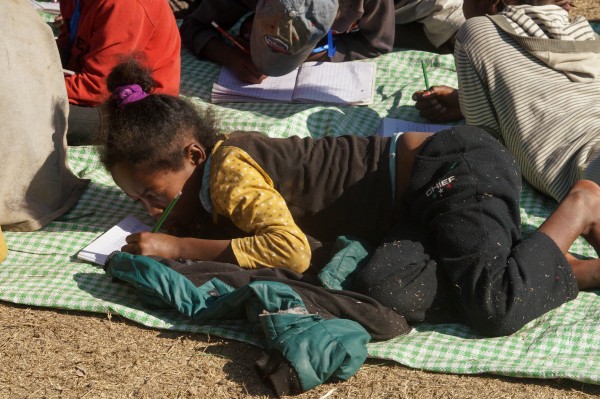 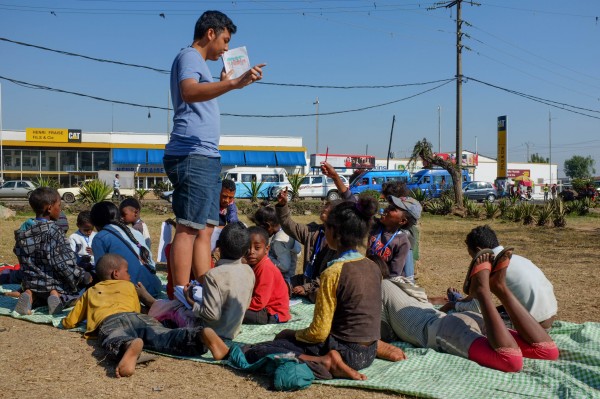 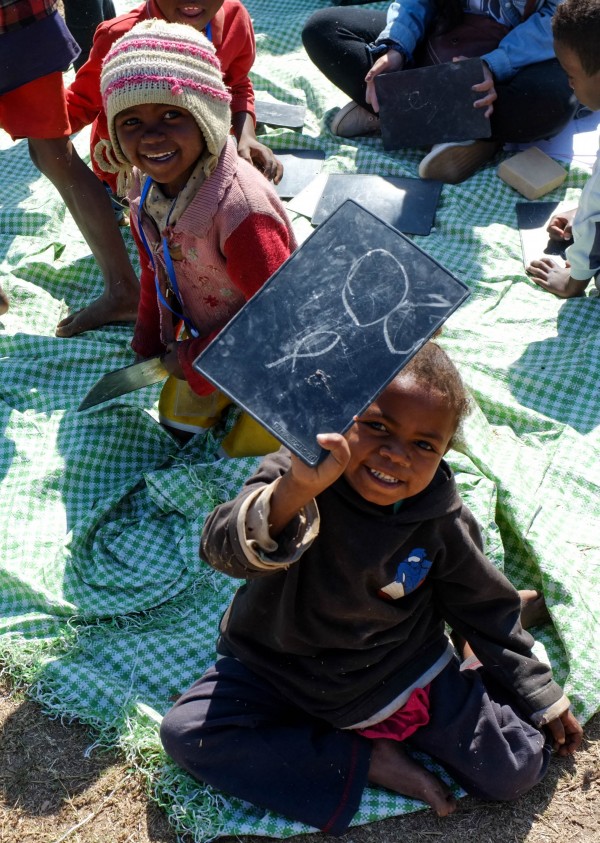 This is Teach for Madagascar, a group of volunteers that provides educational services to kids who otherwise are unable, usually for financial reasons, to attend school in Madagascar.  The kids get a few hours, a couple of times a week.  They soak it up like sponges. 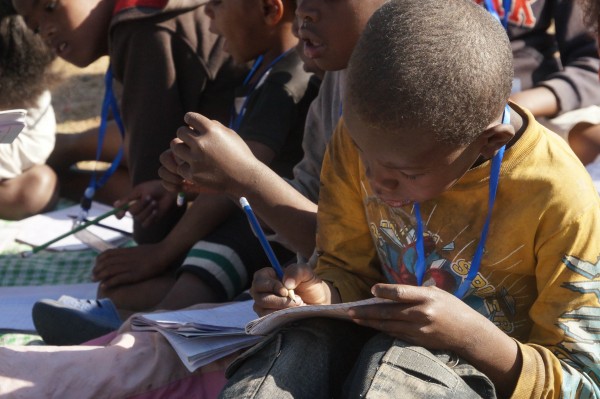 The second part of today’s lesson is all about dental hygiene.  Everyone receives a toothbrush, which they wet and dip into a bag of wood ash, which was used to clean and whiten teeth in many parts of the world before toothpaste became available. 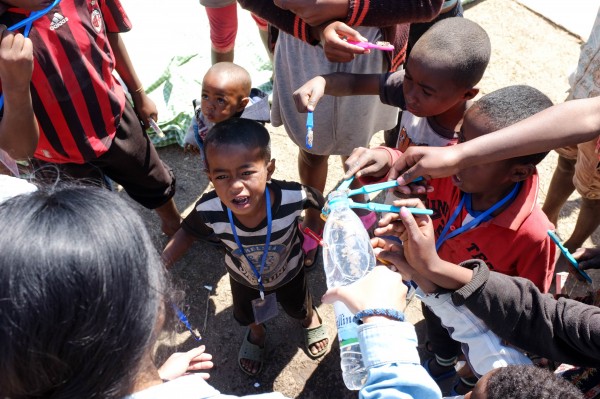 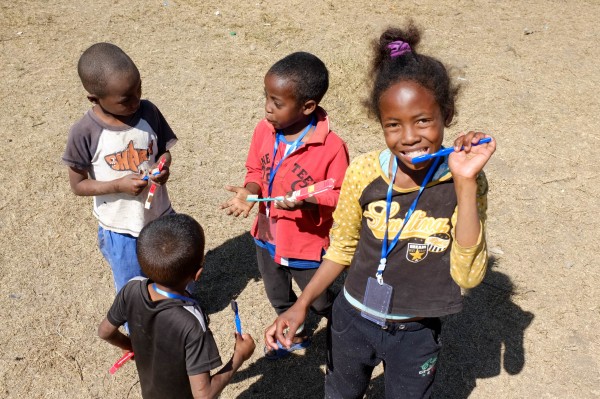 They grimace from the taste, but apply the tooth brushing techniques they’ve just been taught.  They get to keep the brushes.  Soon, another Saturdays classes draw to a close as a few parents begin appearing to take their kids home.  Others will make their way home on their own, taking young siblings by the hand and carefully guiding them through the traffic that continues to circle around their makeshift classroom.