For most people, going on a safari is the trip of a lifetime.  And there are numerous well-known game parks and reserves, in many African countries, where you can do just that.  But if you decide to take the plunge and see the amazing animals and landscape most people only get to see in coffee table books or on nature documentaries, going to the most well-known and/or popular reserve may not be your best choice.

We’ve had the good fortune to live in southern Africa for a few years now and have learned that there’s quite a variety of options.  Most southern African capitals have one or two parks just outside the capital – these are often little more than glorified zoos; sure, the animals are not penned in, but they’re clearly tame – the guides summon them by surreptitiously sprinkling food, you get your photos and you can check the box – great if you’re pressed for time and want to be sure and see something.

There are also the wild, remote places that have been preserved as national parks, where the animals are still truly “wild.”  These places are important for conservation, but if you go as a tourist, it can be frustrating if you’ve shelled out thousands of dollars and don’t wind up seeing much – maybe because it’s the rainy season and the animals aren’t particularly pressed to gather at the watering holes.

South Africa has a few really well-known reserves you can get to relatively easily and see plenty of wildlife – but we’ve found they are so popular you find yourself competing with all the other visitors.  The guides are all communicating by radio, and the second someone spots, say, a lion kill, the word gets passed and suddenly you’re one of a dozen SUVs crowding around an animal and can’t get a decent photo that doesn’t have other tourists or cars on it.

Madikwe Game Reserve was a pleasant surprise, in that it wasn’t at all crowded, we managed to see an amazing number of animals – to include every member of the “Big Five” plus as a bonus, a pack of wild African dogs.  The guides worked together to ensure there were only a couple of vehicles at a time at any one site, and you could tell that they were all motivated for their love of the animals and were interested in sharing that passion with us.

The reserve is in the extreme north of South Africa, buttressed against the border with Botswana.  Apparently it was unproductive farmland, so the government decided to set it aside as a game reserve – South Africa’s fifth largest and one of its least-known.  There are a handful of lodges scattered throughout the park, but none so close that you see any of the others.  Gaborone is just 30 km away or you can drive the 400km from Johannesburg; but we were a bit pressed for time and open to adventure, so we hired a small charter plane that landed us on the small airstrip in the reserve. 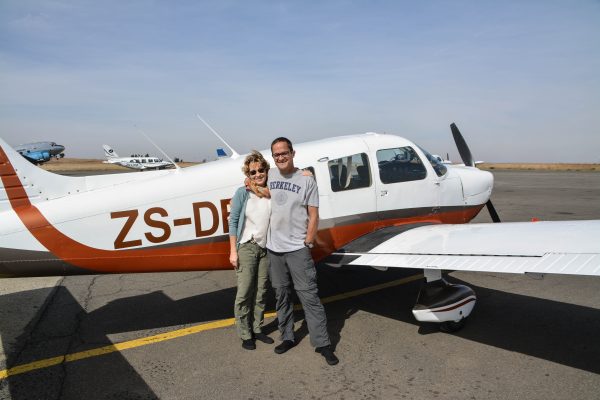 Apparently the way this works is, these little planes buzz the airstrip to scare off any errant wildlife, then come around on the second pass.  I didn’t know this and was surprised when we didn’t land.  The second time, there really was wildlife on the airstrip and I was relieved when we pulled up again at tha last minute.  You can see the wayward warthog in the center of the photo below. 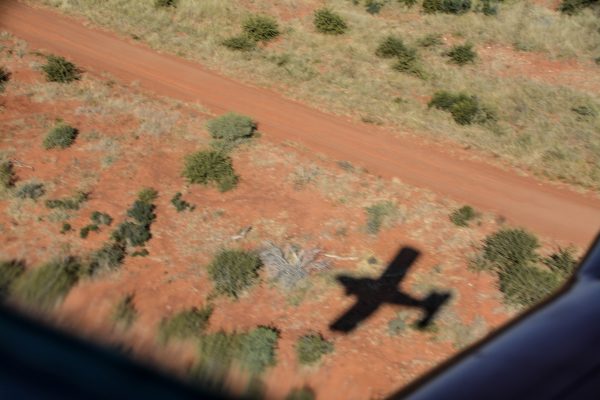 We were staying at Madikwe Hills Lodge – a bit of a splurge for us, but we were celebrating a late anniversary.  The attention to detail by the lodge was like nothing we’ve ever experienced.  The guests were all on a set schedule of meals and twice-daily game drives, but nothing felt scripted – it was all completely natural and everything was looked after and the food always fantastic.  We were there in the cooler season (meaning fewer guests!) so the early morning game drive (departed in the dark) and the late afternoon game drive (returned in the dark) were pretty chilly – but made much better by the thick blankets and hot water bottles thoughtfully provided for us!  There’s a poor guy who has to sit out on a chair on the front of the vehicle who acts as a “spotter” for unseen obstacles and wildlife, and he had it rough – but did a great job. 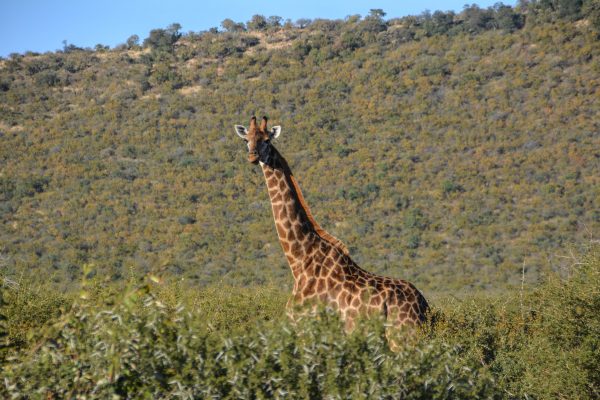 Giraffes are not one of the “big 5″…but they are big. 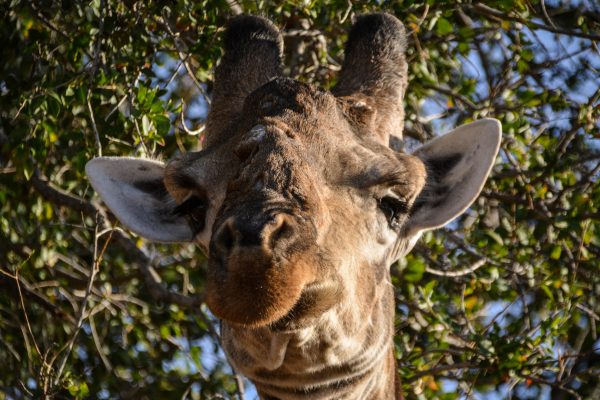 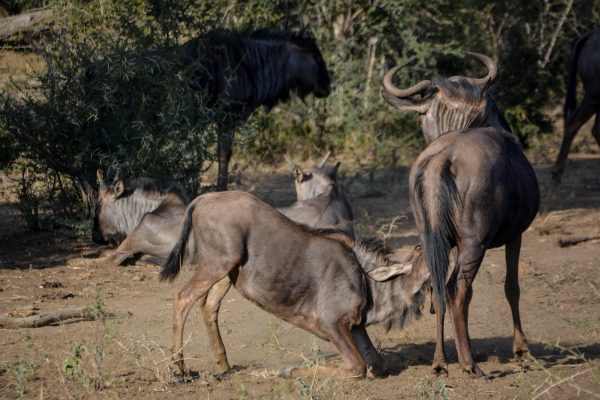 How old is too old for breastfeeding?

As noted earlier, we’ve been to a lot of game parks in southern Africa.  Despite the scrubby-looking nondescript terrain of the park, no park we’ve visited comes close to this one in terms of the number of animals – big animals – we spotted.  We’ll start with the lions.  But we came across a pride of them as the sun was edging toward the horizon, and they couldn’t be bothered with us.  Which is different from other reserves, where you definitely need to be inside an enclosed vehicle.  So yeah, I’ll admit, they were a bit “tame” – but it was a thrill to see them this close up. 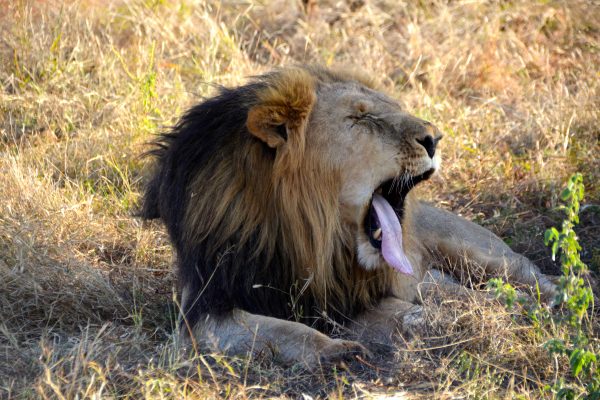 Despite the calm demeanor, this guy has been in some scraps in his time!

The light was just amazing.  This is video I took with my iPhone in landscape format.  So not ideal…

Over the course of the next few days, we also saw the rest of the “Big 5.”  Rhinoceroses, both day and night… 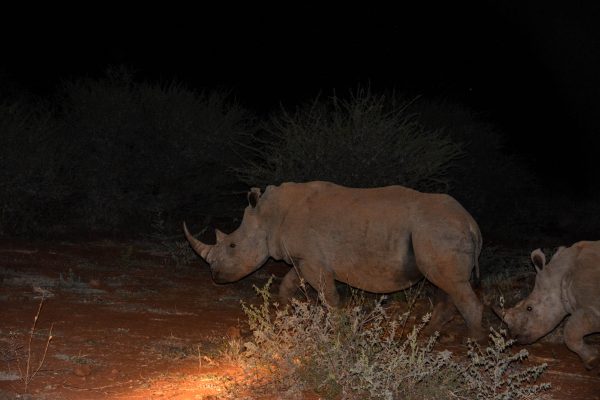 Elephants galore (actually, they are becoming a bit of a nuisance in the park): 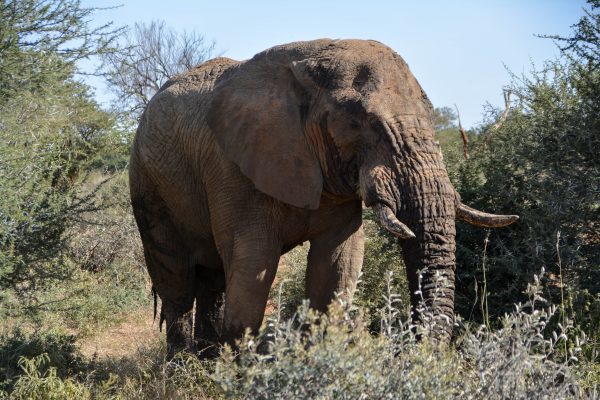 Above you can see just how close we are to these amazing animals…below, to prove we saw one, a blurry photo of a cape buffalo that surprised us just 150 meters from our lodge! 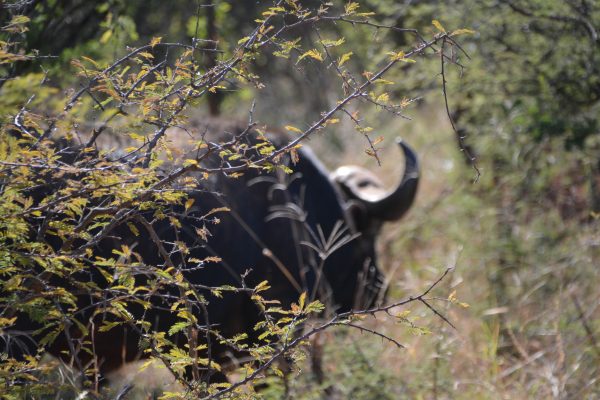 And finally our leopard.  Not ideal photos – the guides had spotted a leopard which was eating a warthog up in a tree.  We saw her during the daytime and went back again at night.  Could hear the leopard eating its prey but the photos obviously were not ideal.  We were particularly impressed that the guides coordinated to make sure there were just two vehicles at the site at any one time – we had to wait about a half kilometer away until we got the “green light” and then only stayed 15 minutes or so, to ensure the next vehicle got a look as well. 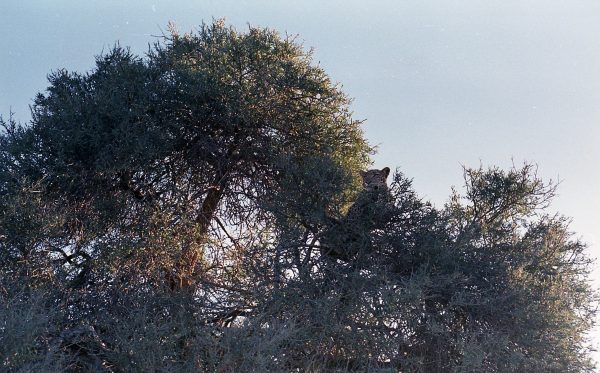 Everyone was pretty excited about the leopard (OK we were too) but the one animal we have never managed to spot on any of our game drives is a hyena.  When we stopped for a “sundowner” drink, not only did we spot a hyena, but the rare(r) brown hyena! 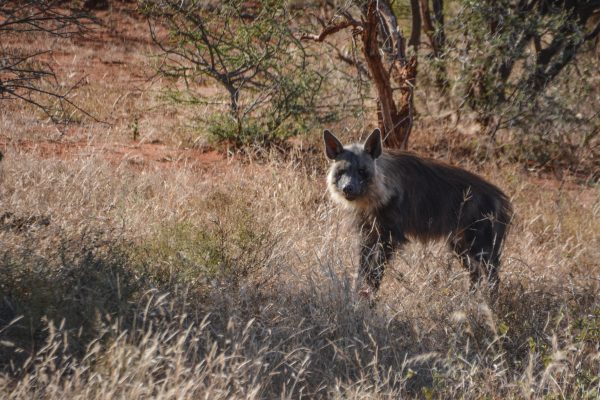 Then it was time to track some African wild dogs, aka painted dogs.  These animals have been wiped out in many parts of Africa but have been reintroduced in selected reserves, including Mandikwe.  People have a hard time with the way they hunt – they work in packs and will basically tear chunks of flesh from an animal they are chasing until it falls down from exhaustion or blood loss.

We chased the pack for some time before they disappeared into the thick vegetation on a hillside.  But we could hear them chattering in the distance.

The next day, we once again set out after them.  They were clearly hunting something, and they paid no attention to us at all as our guide expertly navigated the thick brush to always stay near them.

A few other animals we saw – they’re not included in the “big 5”, but they’re still pretty cool.  Meet the world’s fastest land animal.  A pair of brothers who took a nap when they got bored with the humans taking pictures of them. 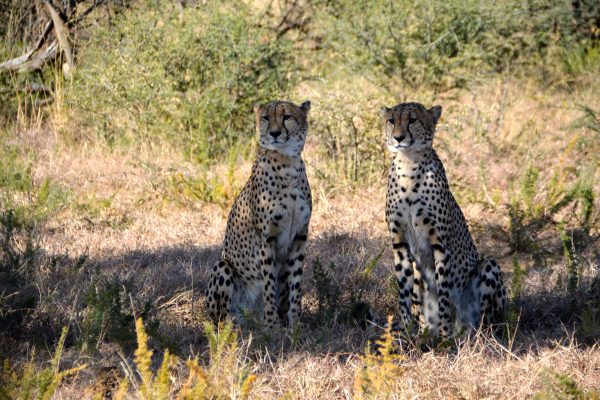 Also zebras.  Anne took a pretty good picture of them.  My film photos were pretty much awful.  But if there’s one thing black and white film is good for, it’s zebras: 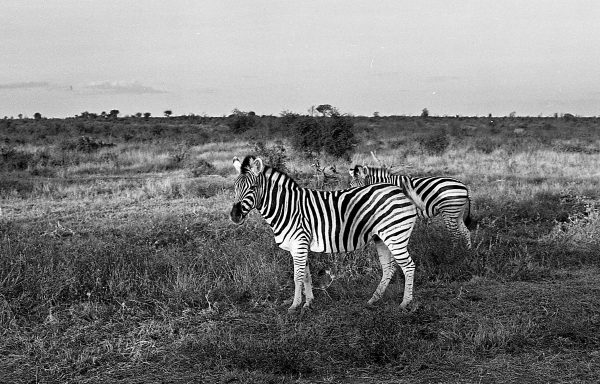 Oh, and also these guys.  It’s a banded mongoose. 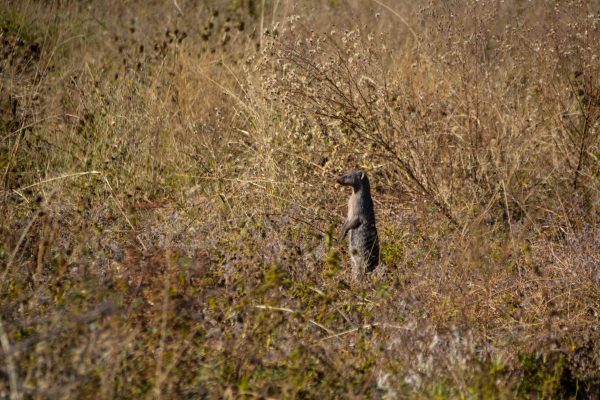 So that about covers it.  You should go to South Africa, and check out Madikwe Game Reserve, and see if you can get better pictures than I did (honestly, it won’t be that hard – other than the b/w photos in this blog, none of mine were any good – PC Anne Daugherty).  But to close out this post, I want to add that even at our room, which was built in such a way that it appeared to overlook a private watering hole that played host to kudus, impalas and other animals, had separate little visitors throughout our stay:

top left:  the rooms at the Mandikwe Hills lodge have lots of glass, and feature a plunge pool that runs about 2 degrees Celsius.  Bottom right:  a hornbill pays us a visit.  Bottom left:  some sort of big fat bird that was waiting for us one day when we get home.  Is it a quail???