Monsoons in Madagascar: a Blessing and a Curse 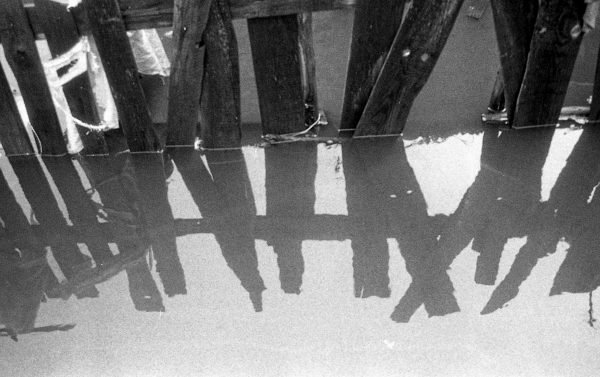 Madagascar’s rainy season normally runs from November-ish to February or March.  Last year, we hardly even noticed it – beyond a handful of late-night, pretty intense, rainstorms, there was very little rain.  And everyone was worried – rice yields were down, the reservoirs were down and we were rationing and storing water – even electricity was intermittently out because the hydro stations didn’t have enough water to power the turbines.

This year has been completely different.  It has been raining increasingly since September.  In January, it has rained almost daily – huge amounts of water per day, we’ve had our first cyclone of the season (Ava) and there are more expected. 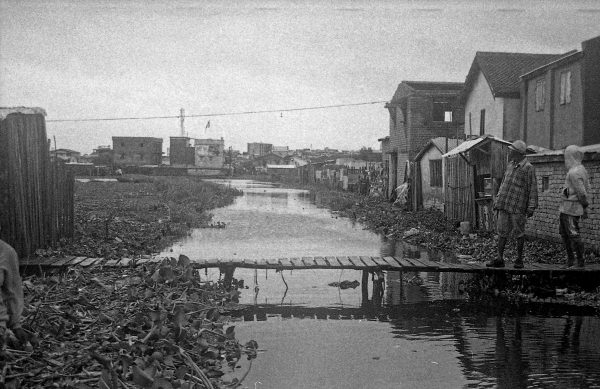 For the financially secure, the rains are an irritant.  Your commute may be longer, your yard may flood, your roof may leak a bit…but for most people in Madagascar, this much rain is a major problem.  People standing outside waiting for public transportation, getting splashed by cars going through potholes, riding bicycles and scooters, selling or buying goods in the open markets…

In Antananarivo, the term “low-lying areas” is a euphemism for the poorest parts of the city.  These areas are, generally speaking, the low areas in town, next to dirty canals, along huge flood plains or rice fields, along the river – a ramshackle of self-constructed brick homes or improvised houses, sometimes built on an area that has been elevated above the water table by piling trash, broken rocks, vegetation, or a mixture.  Raised wooden walkways criss-cross these communities, often with missing planks here and there, but the locals somehow keep their balance after years of practice.

Normally these walkways are 2-3 feet above the water level, but a friend and I visited the Anjezika community, where we have built a crowdfunded youth center, and we were shocked to see that many of the walkways were at water level, or sometimes below the surface.  We navigated the slippery boards in our boots and tried to keep our cameras dry as the rain continued to fall. 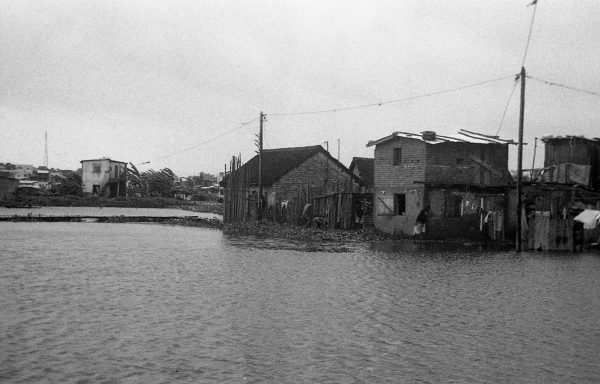 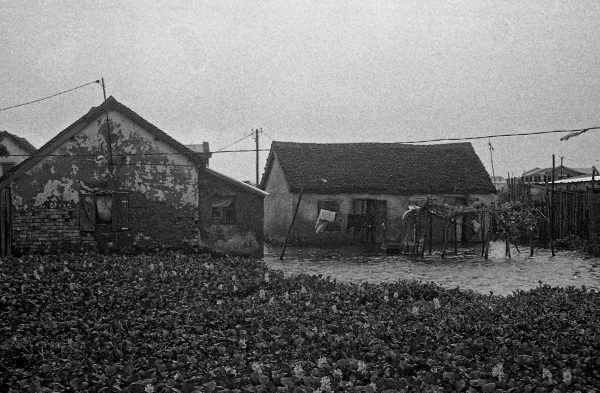 Most of the homes were completely surrounded by water – their yards submerged, and a thick layer of water hyacinths was choking the waterways.  Several people saw us with our cameras and asked us into their homes to show how bad the situation was.  It was too dark to take pictures, but some of the older folks had nicer, wooden furniture they had amassed over the years, all sitting in about 3 inches of water.

It’s not clean water, either.  There are some toilets and outhouses, but there is no plumbing.  The rising water level has overflowed many of them, which creates huge sanitary problems and risks. 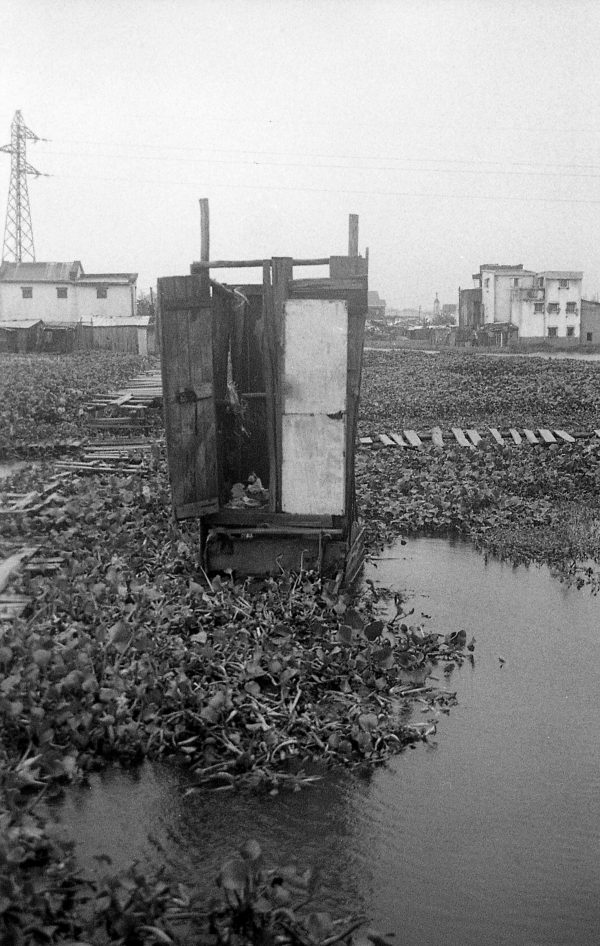 There’s no trash collection service.  People don’t amass anywhere near as much excess packaging material as we might elsewhere, and everything is reused and recycled, but eventually things get discarded.  In the dry season, the trash collects in designated areas and is often covered by dirt and forgotten, or maybe ends up getting burned.  With the rains, it has become uncovered and floats around the community in huge floating “islands.” 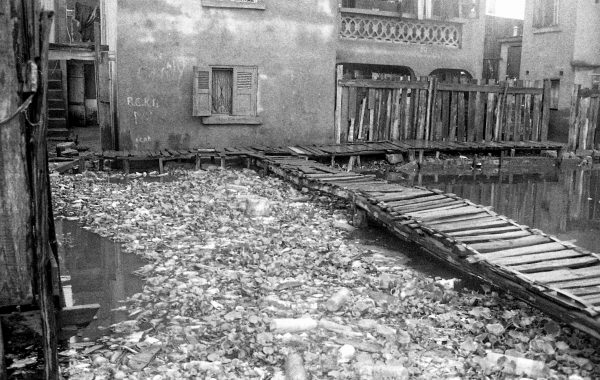 Some peoples’ homes are isolated by the rising water, such that the only way they can get to and from their homes is by flat bottomed boats which are pushed along using a long pole.  When they reach the water hyacinths, someone at the front of the boat has to push them to the side, while the person in the back forces the boat forward. 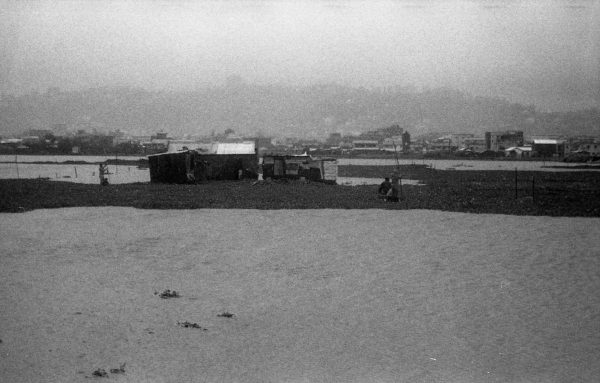 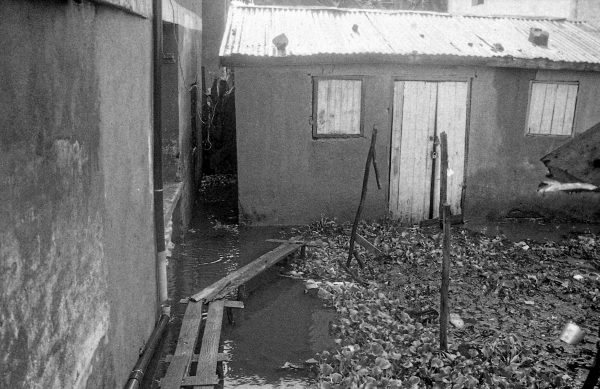 People improvise and do the best they can to get through the worst of the rains, but it’s not easy.  It reminded us not to take things like a roof over our head for granted. 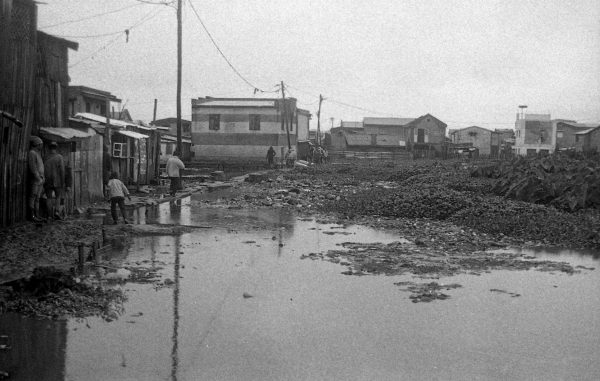 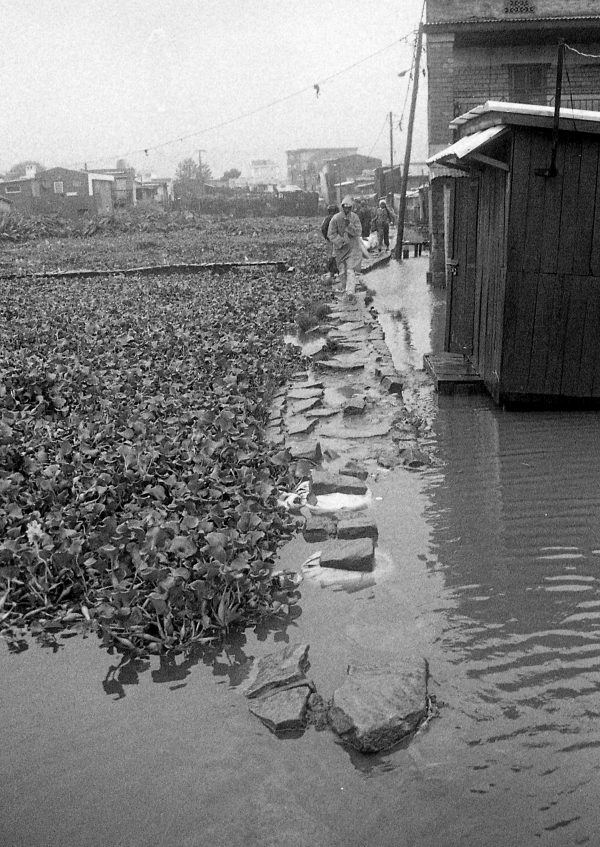 The black and white grainy photos I took in the rain paint a dreary picture – more dreary than it actually is.  The next day, the sky cleared and I was able to run to work on the trails running through the rice fields.  There was only one spot that was flooded and you had to wade: 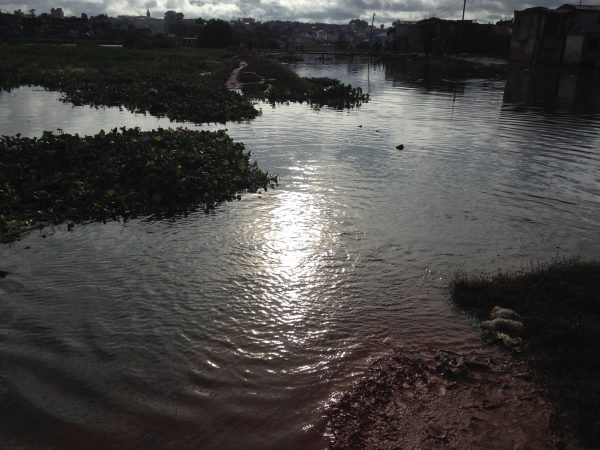 But the water everywhere, and green rice and purple water hyacinths, and the red soil under the morning sunlight was actually quite scenic. 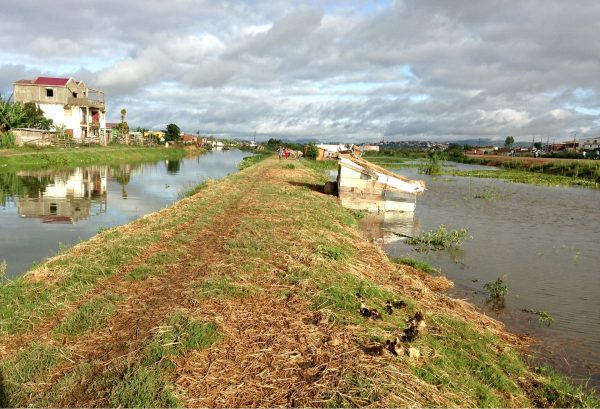 But when you look closer, you see the signs that not all is well.  I was shocked to realize that about a quarter of the ducklings in the photo above were dead or dying – I have no idea why.  People live in the house at the top center above.  And below, where you see people walking – that’s normally a pathway where cars and bicycles drive – but now people can’t even leave their homes without wading. 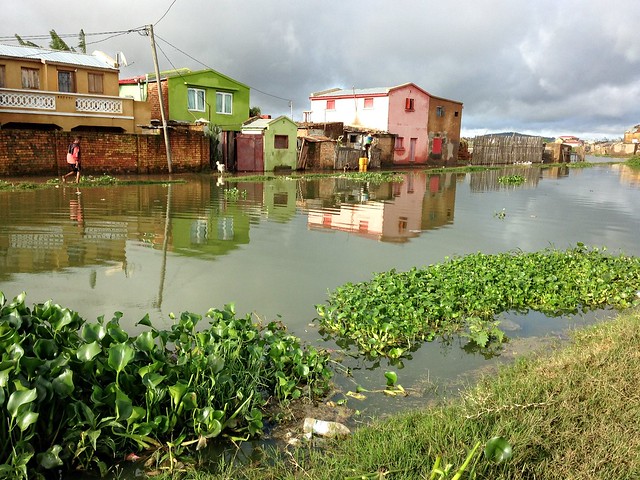 The boy in the photo below (left) was heading to school while his father filled sandbags and worked on a temporary shelter on the walkway, which was above the water level. 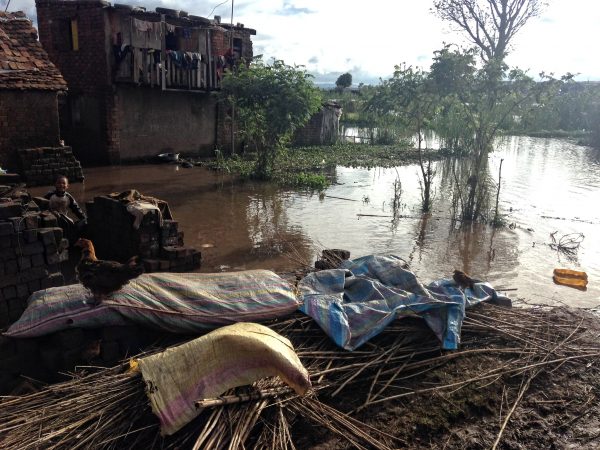 And even as people slogged through the water in wet clothes and worked to restore some sense of normalcy, or others walked in chest-deep water to harvest rice that should have been in six-inch-deep water, and was not quite ripe but had to be cut in order to salvage what could be salvaged…but the sun was shining and it was a beautiful day and everyone smiled and waved and was friendly to the passing foreigner.  The failure of the rain to dampen their spirits is a testament to the resilience and hard-working nature of the Malagasy people, who are all just doing their best to try and put food on the table, and educate their kids so they can have a better life.  Let’s hope the weather holds for a bit so they can catch a break before the next storm arrives. 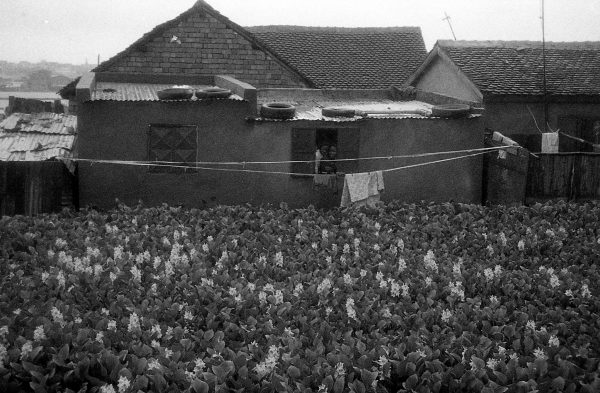