…but what’s there to do in southern Madagascar?

In our quest to see everything there is to see in Madagascar (for which, honestly speaking, there is simply not enough time, but we’re trying our absolute best!) we recently made our way to south Madagascar.  Specifically, we went to “Fort Dauphin” – which was renamed Tolagnaro, (or Toalagnaro), in 1975 and yet inexplicably, everyone continues to refer to it as Fort Dauphin. 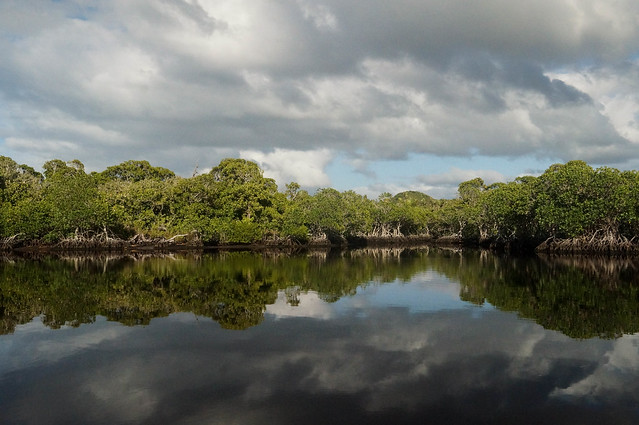 To be honest, the city of Tolagnaro itself is not exactly the world’s top tourist destination.  It’s a small, quaint town with amazing sea views that’s a bit neglected by the center (of Madagascar) since it was initially founded in the 1600s.

When we visited the area, we only ended up staying a day in the town itself, and then headed toward the northeast to Manafiafy Beach & Rainforest Lodge.  The trip up goes pretty quickly in the beginning – about halfway to the resort, it’s a beautifully paved road, courtesy of QMM/Rio Tinto, which mines ilmenite nearby.  After that, it’s unpaved although still pleasant and scenic.  Which brings up an odd fact about the Tolagnaro region:  as you drive through local villages, rather than the usual “salut, vazaha,” the kids will call out “eh-lo” (hello).  This is apparently because the region was the target of English-speaking missionaries (British, Norwegian, and finally American – for a century!) for quite some time.  In fact, many of the staff at local resorts speak English – but not French! 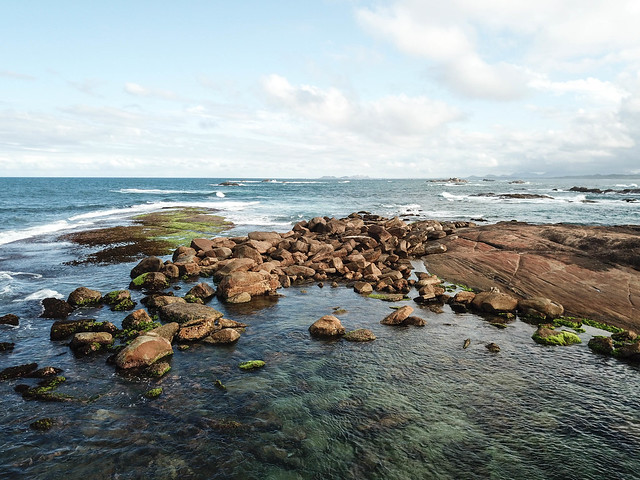 Once you arrive at Manafiafy Beach Resort, you’re immediately struck by the amazing scenery, thanks to offshore rocks that protect small bays and beaches.  Upon arrival, the resort assigns you a personal guide who works with you to identify daily activities that cater to your personal interests.  If you’re not into being waited on hand and foot, they quickly get the message, however.

Among the activities we chose were a night walk to a nearby littoral rain forest, nearly unchanged from the way it was when humans first arrived in Madagascar.  A local guide helped us find and identify several local lemurs and reptile species. 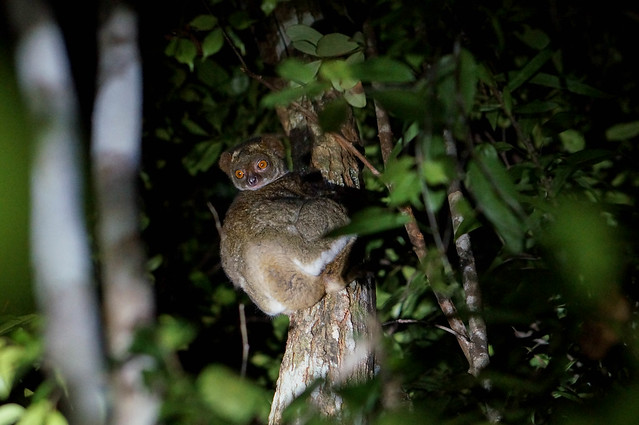 A nocturnal “sportive lemur” stares down at us from a tree. 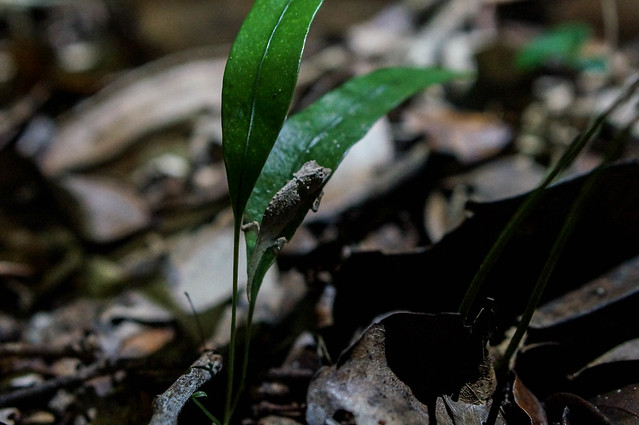 The tiny Brookesia chameleon is sought after by herpetologists. 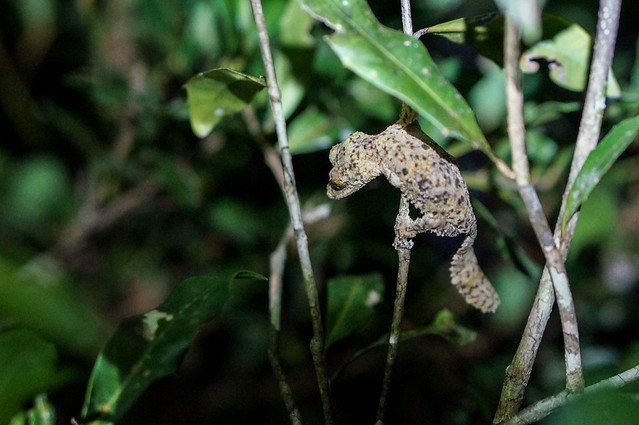 It’s usually difficult to spot the leaf-tailed gecko.  it helps when they are in the open.

Probably our favorite outing was when we got up before sunrise and took a boat trip into the nearby rivers and lakes.  The brackish water is lined by mangroves and is home to numerous water birds and kingfishers looking for a meal in the abundant shallow waters.  We were treated to a stunning sunrise, and then made our way deep into the winding river system.

We spotted countless birds and enjoyed the amazing scenery.  you could clearly see the difference between one side of the river, which was primary forest, and the other side, which was available for human exploitation.  I got my drone to follow us out, and eventually lost track until the drone “decided” it lacked the battery power to return to its start point, and apparently lost its will to “survive” by attempting to land in the shallow water. 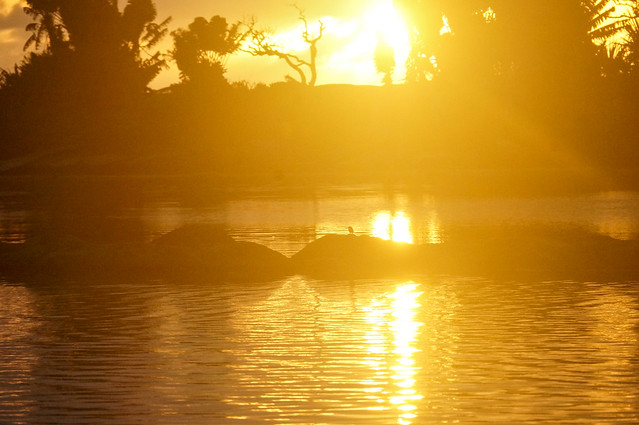 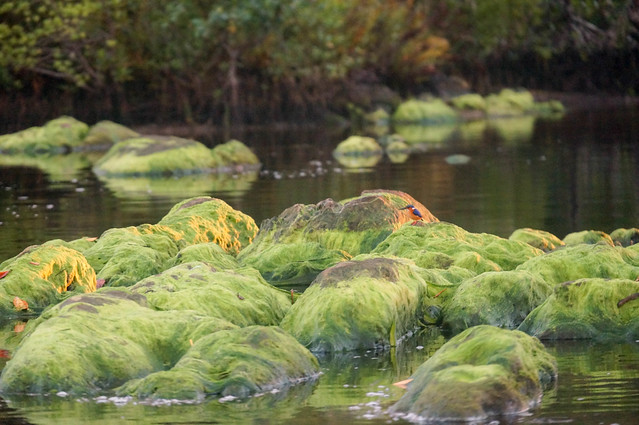 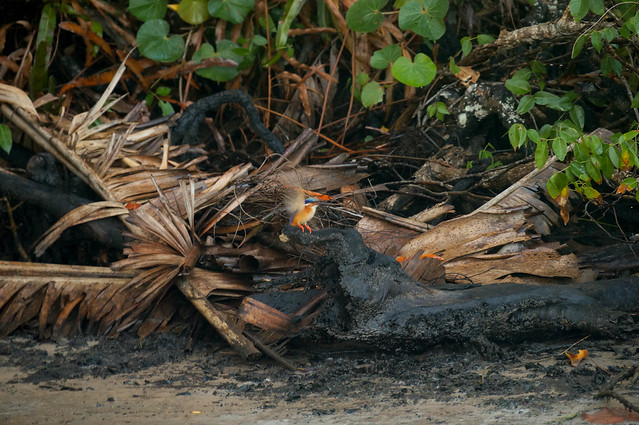 Wings are a blur as a Malagasy kingfisher decides we’ve gotten too close.

We also headed into a nearby fishing village with our assigned guide, who provided important details about the local village, such as its prohibition on four-legged animals, which had been in place for generations since having been put in place by a king with a leg deformity.  Local fishermen arrived every 10 or 15 minutes with their catch of the day, which became the object of endless haggling by the villagers who had walked from as far away as the distant mountains that could be seen in the distance.

Tuna ranging in length from four to five feet were arranged on nearby tables, and we wondered where the ice in a nearby chest had come from.  We were told that it had been brought from the city to preserve the fish. 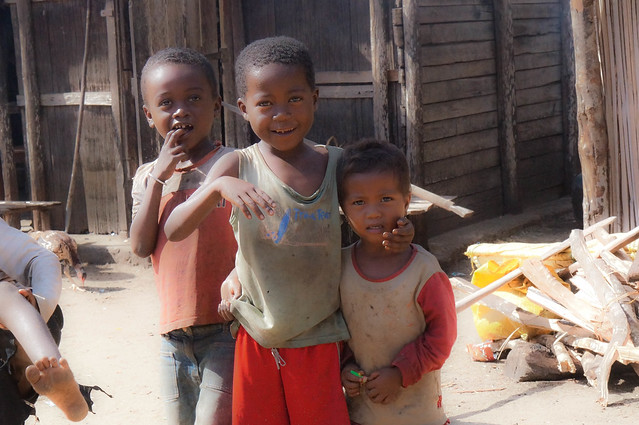 Local children seemed fascinated with us, though we knew we were certainly not the first “vazaha” to visit their village. 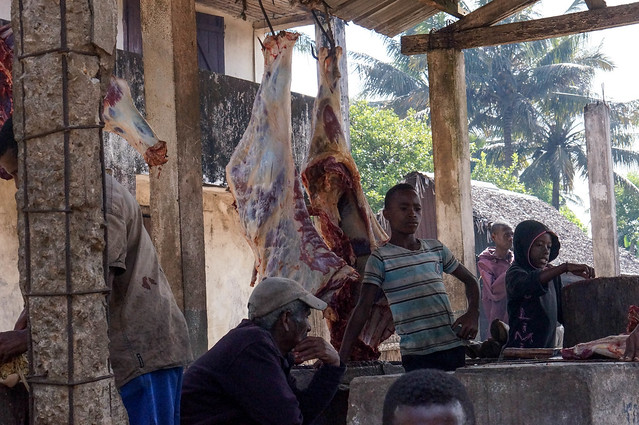 As you look out to sea from Manafiafy Resort, to the left, a long rock stretches a few hundred yards into the sea.  We were told it’s the one place where (if you’re lucky) you can get a bit of cell phone reception.  At the top there’s a bench where you can enjoy the idyllic scenery, and there’s these odd wooden carvings in clusters nearby.  We had fun one cloudy night playing around with long-exposure night photography, using red or white flashlights.  But it’s also quite pleasant just sitting up there and alternate between simply gazing out to sea, and doing nothing at all. 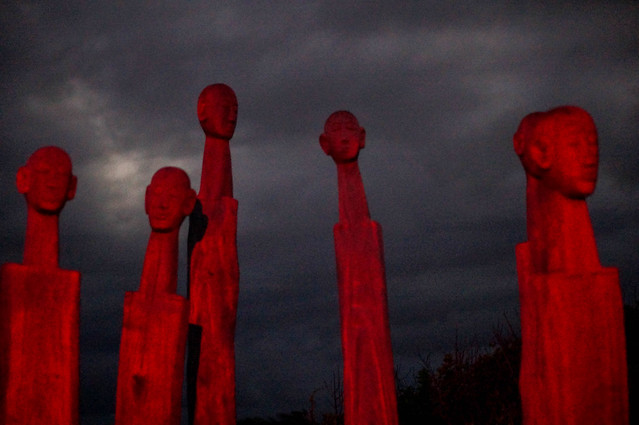 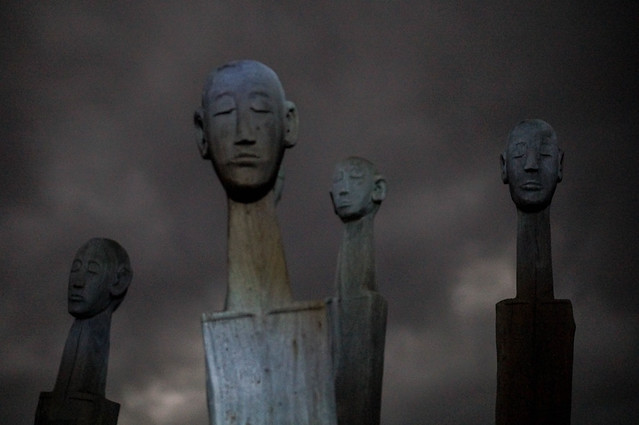