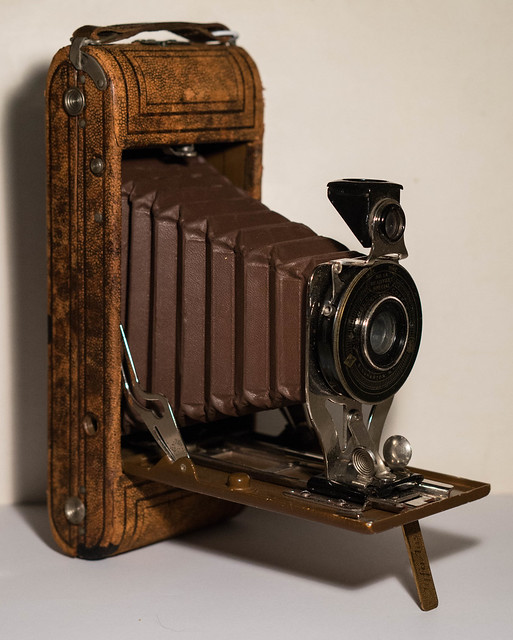 This is a camera I bought, not knowing anything at all about it, simply because I thought it looked cool. It turns out that this particular model is not all that well-known, but the overall Ready-set series is. The Ready-Set series was introduced around 1928, around the time Ansco merged with the German firm Agfa (a bad choice, as it turns out, as the US government took over this company, which predates Eastman Kodak, in 1941, due to its ties with Germany). The Ready-Set series was introduced to challenge Kodak’s new colored models, and featured bright colors and simulated leathers of various types such as ostrich. They were inexpensive and could be carried as a fashion accessory, depending on the particular look of the camera.

Best of all, they boasted an ease of use that would allow just about any amateur to take decent pictures. Back then, most cameras required a fair bit of knowledge and understanding of photography, chemistry, and an ability to estimate light levels, distance, and other factors. In contrast, the Ready-Set made things easy, as spelled out in an advertisement of the day:

Here’s a camera that’s got thousands of people taking pictures again! Intelligent people who had given up in despair are now enthusiastic, for the Ansco Ready-Set gets such clear, beautiful pictures.  Maybe you have had trouble? Lots of people do. some forget to focus – or judge the distance poorly. Then what shutter speed and what opening is the right one? Many fine cameras are made for the expert, who demands a lot of features that just get in the way of the average person.

The No. 1A Ready-set has done away with all those chances to go wrong. No focusing, no judging of distance is required, for 10, 25, 100 eet are all (illegible) for the Ansco Ready-Set. As for the shutter, not even a box camera is so simple. You set either for snapshots or for time exposures. On time the opening is automatically made smaller. Finally, there’s the automatic two-way finder that prevents chopped-off heads and arms, a wonderfully helpful feature.

Sunshine, and someone to take the pictures – that’s all the $11.50 Ready-Set asks for fine results. If you’ve failed continually, try the Ready-Set with Ansco film, and get good pictures from the start.

Here’s another ad, maybe from a couple of years earlier, with an even lower price: 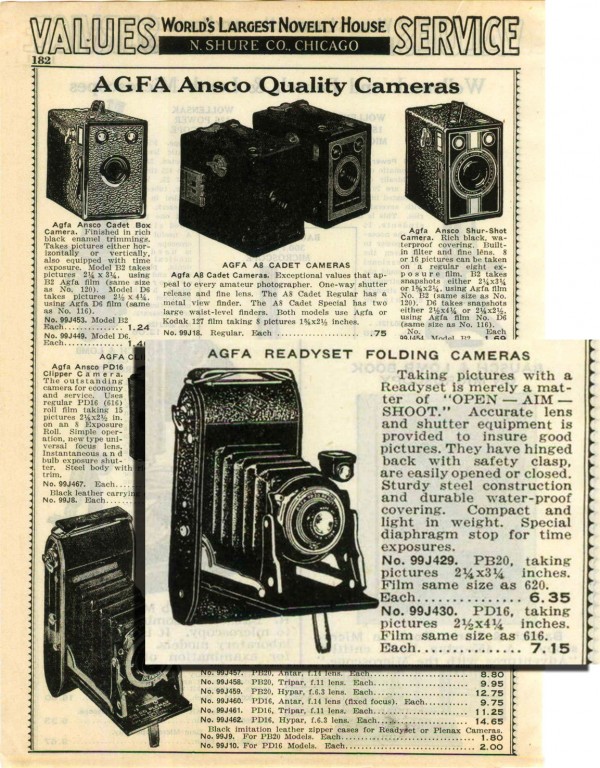 There is really only one setting on the camera – if you rotate the dial to “inst”, the shutter opens and closes on its own – I’m guessing around 1/50 of a second or so.  On the “time” setting, the shutter stays open until you click it again to close the shutter.  For example, if you were to take a photo indoors – this preceded the days of flash bulbs and cubes.  So your subject would have to sit very, very still…. 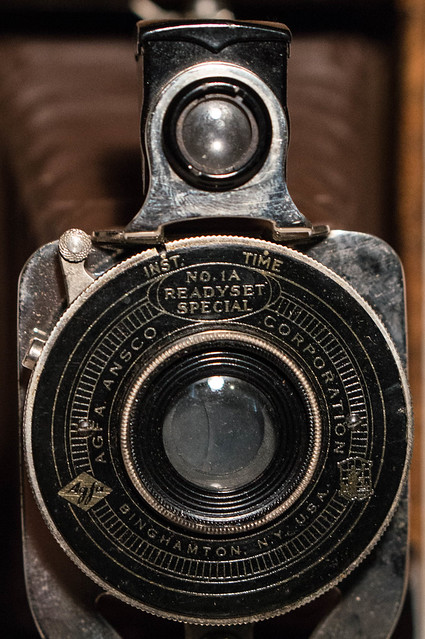 As indicated in the ad above, the camera came in several different sizes.  The one I have is one of the largest models, using “film same size as 116” (Ansco had their own film size naming conventions).  As this film is no longer available, I had to get creative.  Some people modify the camera, but I prefer to modify the film – i.e. I take the smaller 120 film and respool it into a 116 backing paper and spool, as explained in this post.  This allows me to take 7 photos that are slightly cropped along the longer edges.

How did things turn out?  Well, I’d say there is a reason why most cameras of the day had all the different settings they did.  But the camera companies were trying to expand their customer base to the casual photographer, so it was in their interest to produce cameras that gave decent photos in “average” conditions.  It would be great to experiment with Ansco’s film of that time era, but using today’s film, here are my results: 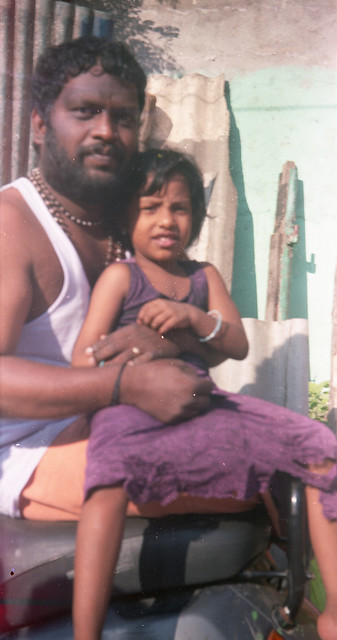 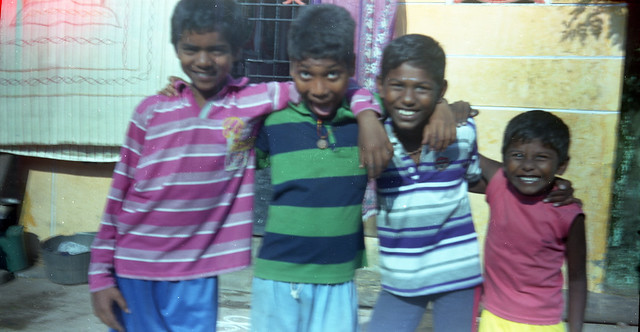 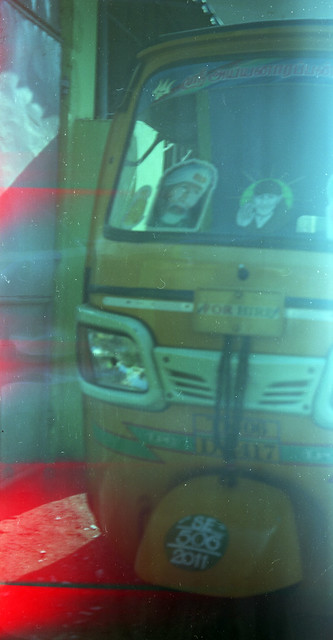 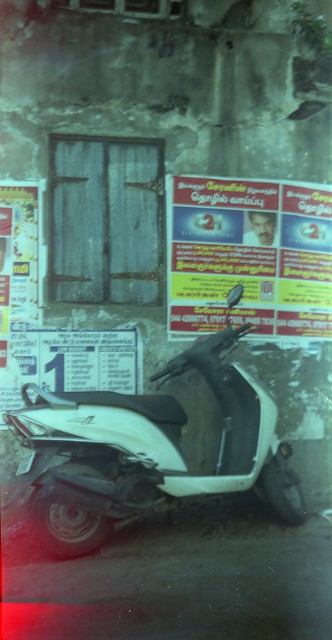 The last one is my favorite, even though it is slightly blurry. 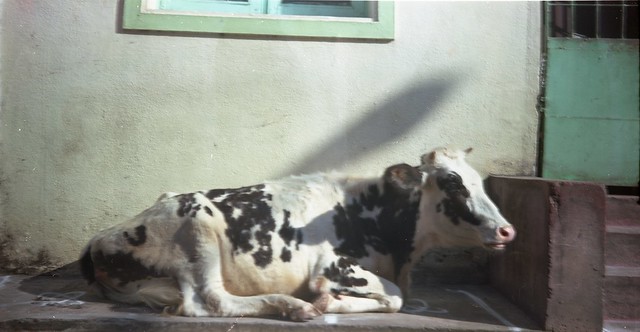 Overall the photos are all a bit “muddy” in terms of color – probably because the streets of Chennai are always a little bit darker than ideal would be for these old cameras.  It would be worth trying this on the beach with black and white.  The red light flares along the edges of some of the shots suggest a light leak somewhere in the camera.  But I’m pretty confident there are no leaks – you can check this with a flashlight in a dark room – so it may actually have been light that leaked in as a result of, or during the process, of re-spooling the film.  Who knows?

But in an age where we take “point and shoot” cameras for granted – and have done so for years – it’s interesting to see that this wasn’t always the case.