3DR Solo: Droning in the Snow

I love these camera-toting quadcopters.  Partly because it’s just fun to fly stuff around (yes, I’m still about 12 at heart) but mostly because of the new opportunities they offer for photography and videography.  After seeing the first few videos people had made with them, I was hooked.  The problem is, the technology moves so quickly, they’ve come up with something new a week after you’ve dropped a grand on your latest toy.  So I sold the DJI Phantom 2 and switched over to a 3D Robotics Solo. 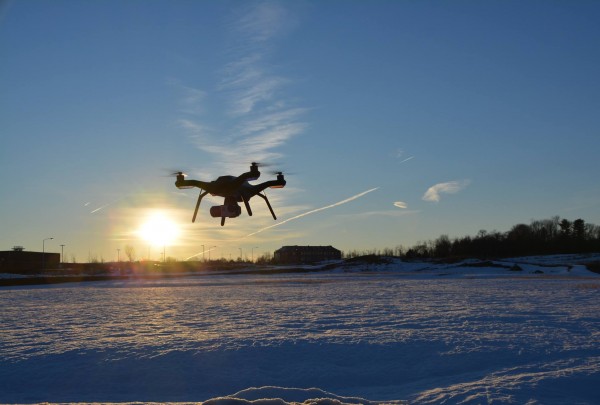 On Friday I finally got around to doing the new registration that’s required by the FAA.  I had to use the paper process instead of online, since I intend to use it internationally, but once you send it off, you can fly it for the next 90 days while you wait for the approval to come back.  I was in business!

So we headed out of the city to an office park with a lot of open spaces in Melford, Maryland.  We got there late in the afternoon and I was getting everything set up – the sun was low on the horizon and the yellow light was reflecting off the snow – and I suddenly realized I had left the SD card at home!  Fortunately, there was a Target just 10 minutes away but by the time I got back, most of the best light was gone.  So I flew a little and ended up crashing into a tree, losing two propellers!

This ended up being a good thing, as I ended up re-reading the operating instructions that night.  The next morning, we were back again at sunrise and everything went off without a hitch.  This is the video that resulted:

My initial impressions of the Solo are really positive.  I have read reviews that suggest the latest version of the DJI Phantom is a better value for the money right now, but I ended up buying the Solo based on its likely upgradeability, and near-unanimous agreement that 3DR’s customer service is much better.   Plus the folks at 3DR say that if your drone crashes or flies away and it’s not your fault (supposedly they can tell from your remote), they will replace the unit for free.  And the camera and gimbal equipment attached to the drone!

My initial thoughts are that I made the right decision.  The Solo feels much more solid and well-constructed, and their “Smart Shots” work wonderfully (supposedly DJI has something similar in their latest model) and can be customized on the fly while the drone keeps the camera on target.  When the unit arrived, the camera controls didn’t work, but the controller told me to contact customer service, who promptly provided a solution that fixed the problem in less than 5 minutes.

I can’t wait to launch this thing on my travels.

2 Responses to 3DR Solo: Droning in the Snow