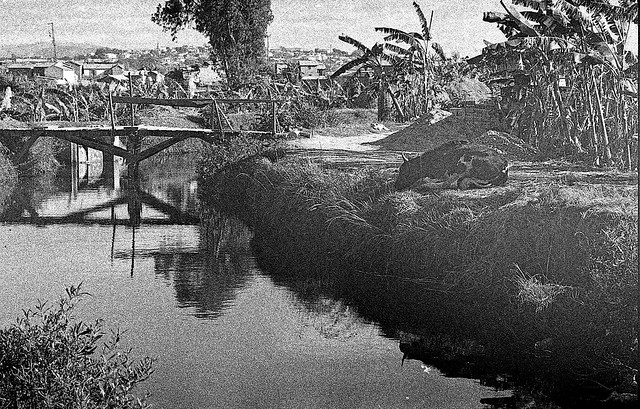 cows and bananas and canals…all on my run route between home and the office!

I’m not a dumb person, but I’ll admit I’ve always managed to confuse myself when reading or speaking about “pushing” or “pulling” film.  Now that I’ve finally given it a shot, it makes more sense, and I’ve learned a few new things in addition.

In case you’re like me, “pushing” film is to shoot a roll of film as if it were faster/had a higher ISO than it actually does.  This means you set up your camera to actually underexpose the film.  Then you make up for that by leaving it in the developer longer, since it needs an extra “push.”  Somehow this was always confusing to me, and I’ve heard other people get it backward as well, so I don’t feel alone.  And pulling is the opposite – you overexpose the film and then underdevelop.  I imagined that pushing would create more contrasty results, and that pulling would emphasize the grays in the middle.  But honestly I didn’t know what to expect.

I had picked up a roll of Ilford Delta 3200 film in the States, and was reading up on how people use this film.  I carried it with my camera on a few trips, but I don’t walk around much in low light in Antananarivo, and I didn’t want to be “stuck” with a half-shot roll of 3200 in my camera, so I decided to take it out on a bright sunny morning instead, and push it.  I’ve read that Delta 3200 film is not really 3200 ISO – it’s actually more like 1600, so by shooting it at 3200, I thought, you’re already pushing it.  But the developer instructions are made for shooting 1600 film as 3200 film, so I decided to take it up farther – to 4000.  Because that’s where my Nikon F100 stops, mainly. 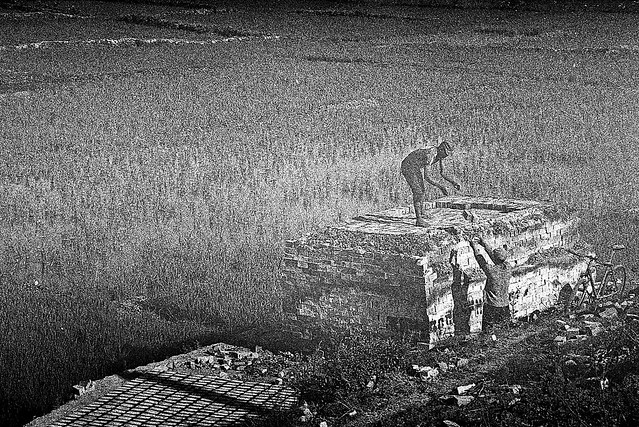 after the rice has been harvested, local farmers use the mud to make bricks, which they sell. This photo shows a brick kiln, which fills the air with smoke during part of the year 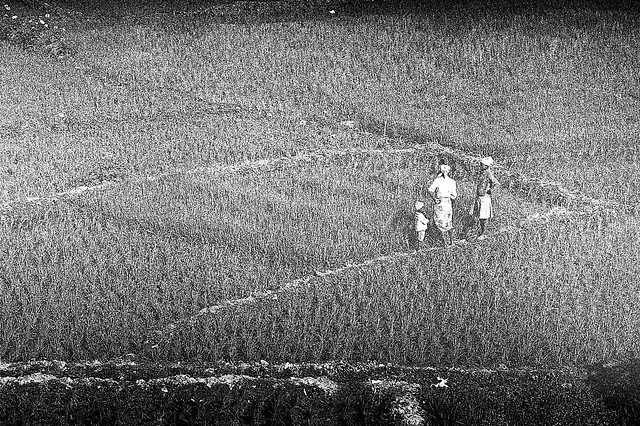 some of the fields show young rice shoots, just planted, poking out of the water.

Honestly, I was pretty disappointed when I saw the results.  That morning on my walk to work, I thought I had gotten some pretty good shots, and they all seemed ruined.  I had expected more contrast.  But I hadn’t figured on all the noise in the photos, which ended up obscuring/blurring some of the details, like facial expressions.  I know digital cameras pick up a lot of noise when you set them to high ISO, but it never occurred to me that analog film would do the same. 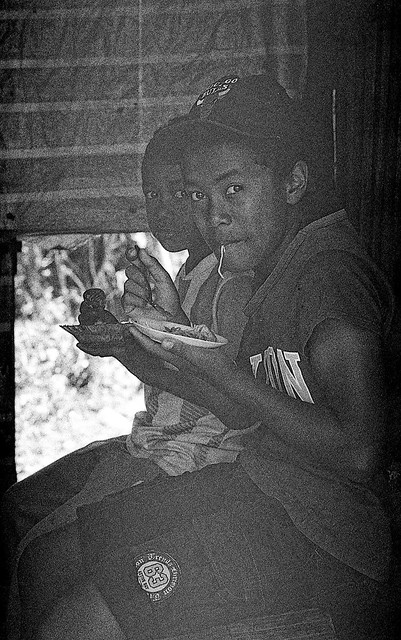 I suppose this picture came out because it was one of the few I actually shot in somewhat low light. 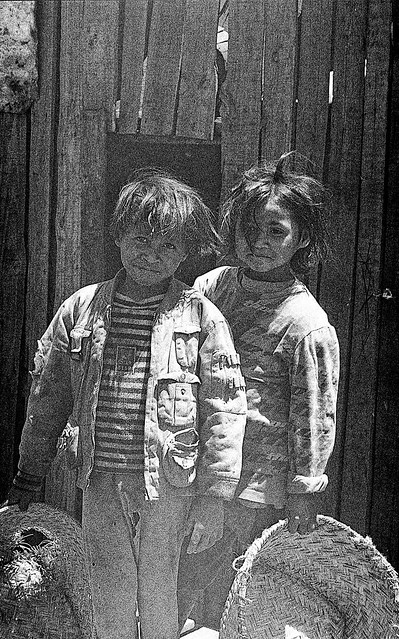 Would have been a great portrait on normal film and not pushed.

A couple of the pictures were salvageable, but most were just way too noisy.  But the more I looked at them, the more some of them started to appeal to me, in a more experimental sort of way.  Like this picture of ducks in a rice field. 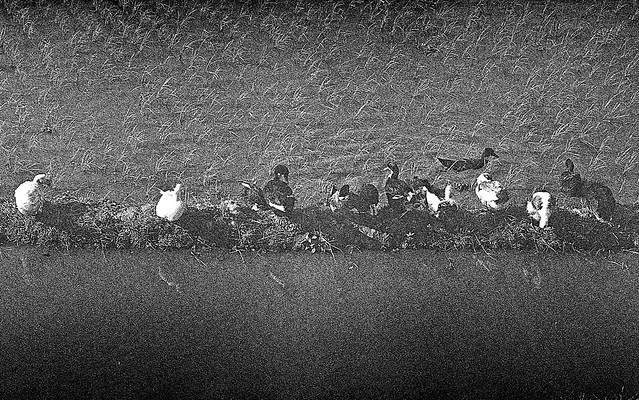 ducks splashing in the rice field.

So I spent a bit of time (I’ll admit) running them through photo editing programs, mostly to darken the blacks a bit and nudge up the detail to give a better sense of what was in the exposure, and I’m happier with them now. I spoke to a photographer friend who explained to me that pushing works better with 400 speed film, so I will try that next.  But in the meantime I ended up ordering more 3200 film, just to play around with that a bit more.  I probably won’t push it.  But I wonder about pulling…hmmm.

I’ll share the rest of the salvageable photos here, maybe you have some thoughts. The results remind me a little of how I imagine film reticulation would work. Only more so. And which is also something I’d like to try. 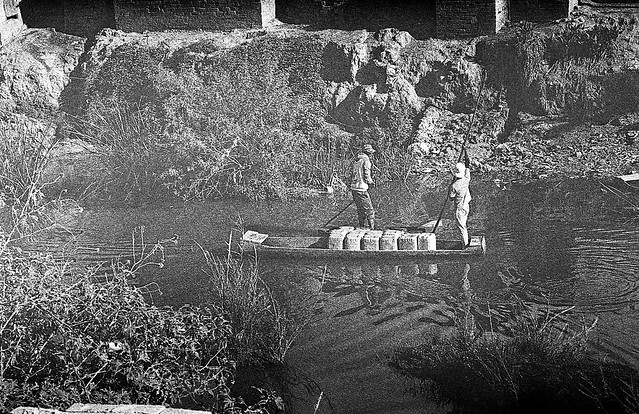 these guys are using a flat-bottomed pirogue to transport yellow 5-liter plastic just of water from the public tap to individual users. The yellow jugs are ubiquitous in Madagascar 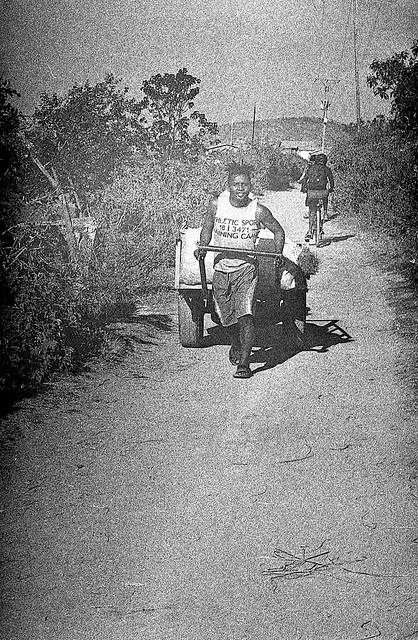 Young men (mostly) use these carts to transport goods throughout the city. Often, barefoot. 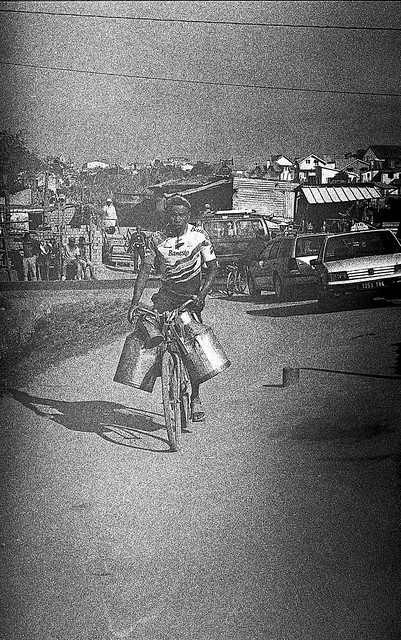 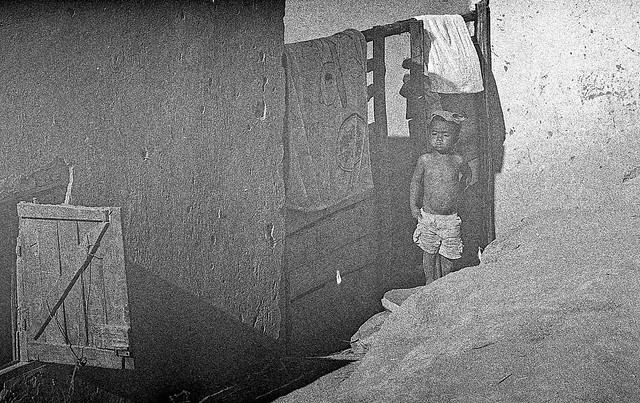 Young boy has recently woken up and seems to have gotten distracted while getting dressed. 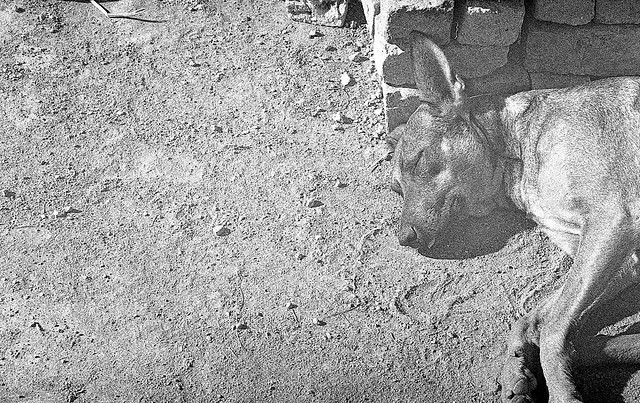 The locals thought it curious that I was taking a portrait of a sleeping dog – but it was the tongue that caught my eye. 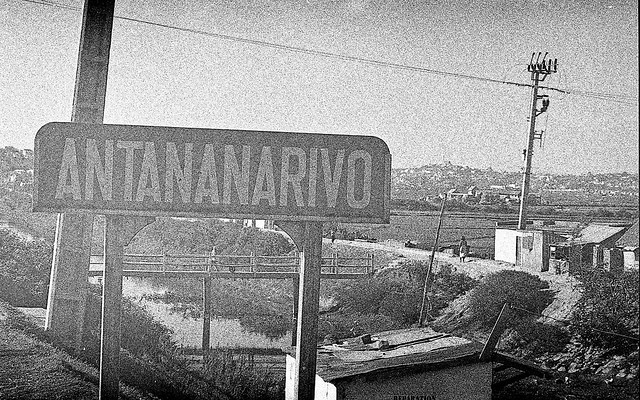 Not far from the office. 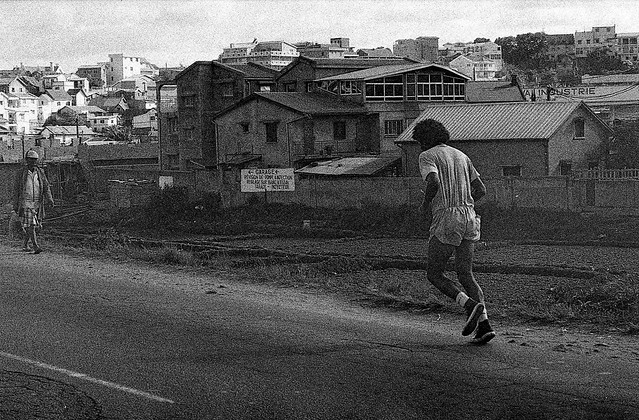 Probably my favorite picture on the roll. I wish I had caught this runner with 1970s hair, shorts and shoes coming toward me – but from behind it was still a good shot of this classic look!